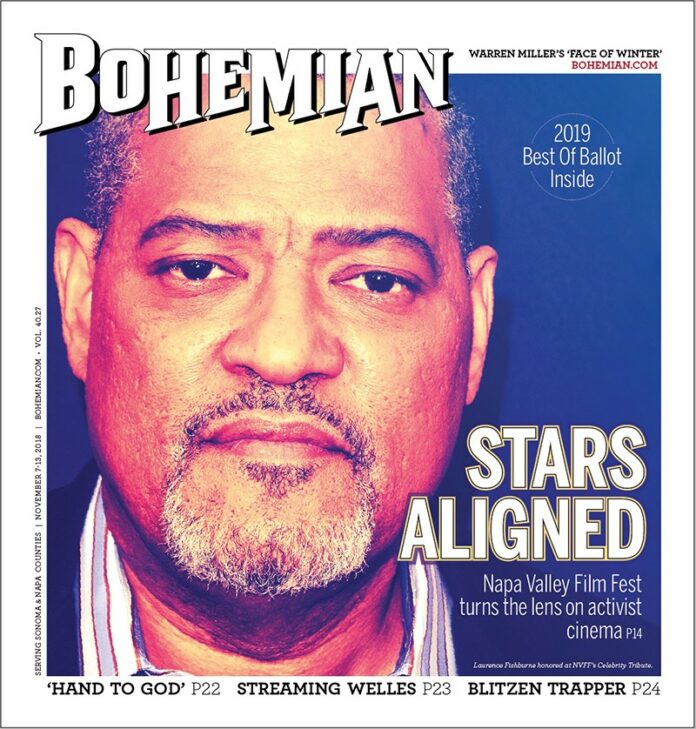 The fest, now in its eighth year, takes a stand with the #ArtInspiringAction initiative, where provocative, issue-based films amp up theatergoers to take action in support of themes explored in the films. One such documentary, This Changes Everything, features an army of A-list actresses who speak out on gender disparity in the entertainment industry. Actor, activist and producer Geena Davis (the main subject of the film), will be presented with the Visionary Award on Friday, following the screening. Davis will be honored for her work to further women’s rights and gender equality; as special envoy for the U.N.’s International Telecommunications Union, and through her nonprofit, the Geena Davis Institute.

On Saturday, a panel, Women in Film: Shattering the Glass Lens, will further extend the conversation around equality with a lineup of female filmmakers who will discuss their careers and ways we can band together to effect change in the industry.

Other #ArtInspiringAction programming includes Afghan Cycles, about a tribe of Afghan women who, despite cultural barriers, oppression and death threats, rally against the patriarchal hold of the Taliban for the freedom to ride a bicycle. Soufra follows the journey of Mariam al-Shaar, a generational refugee, who spent her whole life in a refugee camp in Lebanon. Over the course of the film, Shaar changes her fate when she builds a catering company and food truck with the help of fellow refugee women.

Ask for Jane tells the story of a group of college women who developed an underground abortion network to help over 11,000 women get illegal abortions in Chicago between 1969 and 1973. The film is based on the real-life activist group, the Janes, who operated a spy network to assist with abortions before being arrested in 1972.

A bevy of Bay Area films hit the screen, including Uncrushable, directed by celebrity chef Tyler Florence. The film documents the last year’s wildfires through the eyes of some of those most affected, including victims who lost homes or businesses, first responders, chefs and winemakers. Empire on Mainstreet spotlights serial entrepreneur Crista Luedtke, who changed the face of Guerneville when she opened the Boon Hotel & Spa and El Barrio amid local opposition and a devastating flood.

Brewmaster tracks the rise of the craft-beer industry and offers a glimpse into Sonoma County beer brewing in the ’70s and features the New Albion Brewery. And tails are sure to wag at the #ArtInspiringAction screening of Pick of the Litter, as theatergoers see a litter of puppies scrap it out on a quest to become guide dogs for the blind. The movie is directed by Bay Area filmmakers Don Hardy and Dana Nachman.

With all the drama on and off screen, festival-goers can laugh it off at a sneak peek of the National Geographic miniseries Valley of the Boom (premiering January 2019). The two-episode screening explores the detonation and disruption of the tech boom and browser wars of the ’90s, weaving scripted dialogue and real-life segments. Bradley Whitford and Steve Zahn star.

Funny bones are sure to be flexed at Friday’s special tribute honoring the legendary Groundlings theater group, which launched comedic wunderkinds like Will Ferrell, Lisa Kudrow and Melissa McCarthy. Ferrell said this about his experience at last year’s fest, “I was just happy to be a part of the festival and do a little Q&A but to be honored as well,” Ferrell said about last year’s festival. “It’s great because in the comedy world, we don’t get a lot of awards. It’s nice to have your work recognized.” One of Groundlings’ founding members, Laraine Newman, is expected to attend alongside alums Cheri Oteri, Taran Killam, Stephanie Courtney and Julia Sweeney.

Two new venues make their debut at this year’s fest. In Calistoga, theatergoers can get rolling at the drive-in theater at the Calistoga Fairgrounds, which will screen a daily double feature and sport 50 parking spots for cars and bleacher seating for 100, with enough throwback snacks to cure even the meanest case of the munchies.

The new Feast It Forward studio in Napa will host the Wednesday-night kick-off party and serve as the down valley hub, with a diverse programing and party scene that includes culinary demos, film inspired wine and food pairings, a filmmaker lounge and live music, all set within a happening indoor-outdoor space.—Christina Julian

The Stinson Beach Doc Fest, now in its fifth year, offers a truly filmic treat under one roof—and for a good cause. The festival showcases five great documentaries and is devoted to helping fund the Stinson Beach Community Center. This year’s films gained international attention and accolades, and also hit on an issue or ethic near and dear to many North Bay hearts.

This year’s festival also promises to be deliciously local, with all the choice trimmings drawn from our local larder of love. On opening night, “Gala Night,” North Bay chef David (“I’m the Anthony Bourdain of the North Bay”) Cook will be on hand preparing the food, a “Tastes of West Marin” menu for attendees. Cook will also be dishing up between-films meals through the weekend to attendees at $20 a pop. They ought to make a film about Dave. Maybe next year.

There’s a line from Freddie Nietzsche where the philosopher points out that if you stare at the abyss long enough, it will start to stare back.

With that in mind, there’s no sport like the free-climbing of rocks to make the point about the abyss that looms for one and all—despite the best efforts of the Buck Institute for Research and Aging. Free-climbing has got to be both the dumbest and bravest sport in the world, and every time Netflix puts one of these crazy-climber stories up—you know I’m sitting there, glued to the screen, anxiously puffing away. “Don’t fall, man!”

There’s really no sport that offers such a level of visceral and direct contemplation of the very thin line between life and death that’s all around us, or as the French like to say, le voile est mince.

Free Solo tells the life story of Alex Honnold, who set out a few years ago to climb the 3,000-foot El Capitan massif in Yosemite National Park. He set out to do it without a rope. Dude, are you crazy? Two climbers this year died while climbing El Capitan—with ropes. There’ve been more than two dozen deaths on the iconoclastic massif since 1968. Every time I watch one of those angsty docs about extreme climbers, I die a little too.

Honnold gave an interview to Rolling Stone recently where he says he’s an atheist and comments on that whole idea of staring into the abyss:

“Being on big granite walls is a constant reminder that nature just does not care. You’re just another animal that slipped off something. I’ve seen animals fall off cliffs. I saw a mountain goat bite it in Mexico, which was crazy because you think of them as being so majestic and sure-footed. He survived, actually, and just got back up. I saw a squirrel fall off a cliff once. I was like, ‘Holy shit, even squirrels!’ That’s nature, you know.”

To be a fly on the wall at the Supreme Court these days is to be squashed like a bug in the crosshairs of a Democracy beset by reptile-brain derangement and wet-brain justice, courtesy of Donald Trump and his various appointments to high positions of power; e.g., Brett Kavanaugh.

So it’s cool that liberal feminist crusader Ruth Bader Ginsburg, an appointee of the philandering gasbag Bill Clinton, is in her mid-80s, has survived pancreatic and colon cancer, lifts weights and has been pegged with a nickname that invokes a long-dead Brooklyn rapper and crack dealer, the original Notorious B.I.G, aka Biggie Smalls. They share a lot in common. Ginsburg was also born in Brooklyn.

RGB delves into the mystique and the mirthful, mass-cult hagiography that attends the elevation of a Supreme Court judge to a position of high-media rock-stardom and pop-culture legend.

Much as I totally dig her gestalt, it’s unclear to me how or why Ruth Bader Ginsburg earned this stature—it’s not just because of her opinions and dissents—but I guess the film will explain everything, and then some. It premiered at Sundance this year and has done pretty well at the box office. Here’s to RBG’s continued good health, and to a future filled with films that also celebrate the likes of Snoop Dogg Sotomayor.

Pick of the Litter

Hey, it was just a couple of weeks ago that we were highlighting San Rafael’s Guide Dogs for the Blind in our Pacific Sun nonprofit issue, and—boom!—just like that, here’s a documentary screening of Pick of the Litter at the Stinson fest that’s all about guide dogs and how their cute little lives unfold.

Bay Area filmmakers Dana Nachman and Don Hardy have produced a wonderful and poignant film that highlights how competitive the world out there is for would-be guide dogs, and how not every animal makes the cut. The film focuses on the trainers at the San Rafael training center, where some 800 dogs are born each year—but only a few hundred make the final cut through a rigorous training regimen that takes years to complete.

The trailer alone to this sweet film is so loaded with puppy love and sloppy beasts by the name of Primrose, Patriot, Potomac, Phil and Poppet—well, it almost makes me want to gouge out my eyeballs, grab a stick and be led around the county by a highly trained Labrador. There are worse things.

When most people think about outrageous political conduct in Montana, well, it’s hard to not focus on Sen. Greg Gianforte beating up a Guardian reporter for daring to ask him a question.

Dark Money takes place in Montana and provides some of the sober architecture that explains how a goon like Gianforte could be considered for higher office, and the answer is the 2010 disastrous Citizens United ruling from the Supreme Court, which turned corporations into people, then turned electoral politics into a rolling scandal where thugs like Gianforte would be celebrated by the likes of Donald Trump for body-slamming the First Amendment—which is pretty much exactly what the Citizens United ruling did, too.

Well, this one looks fun and totally local, keying in as it does on the birth of the organic-produce movement in America—which is to say, at the ground zero for organic agriculture in these here United States, Star Route Farms in West Marin.

Why, there’s even a local actress of some renown doing the voiceover for Evolution of Organic, and who once starred as a public defender in the hit cop show Hill Street Blues, in the 1980s.

Weird, we haven’t heard much from her since her starring role in the Steven Bochco drama, but the growth of the organic foods movement since the 1960s is a different story—it has been a loud and proud addition to the American food scene, accessible and delicious to all who dare take a bite, and humble in its vegetative state of no-pesticide purity. The film features interviews with the likes of Warren Weber (founder of Star Route Farms) and Paul Muller of Full Belly Farm, among others.—Tom Gogola