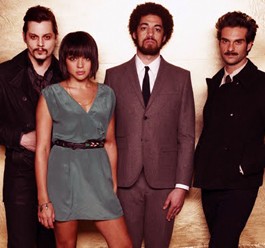 Upon the fame of The Grey Album, the mashup of the Beatles’ White Album and Jay-Z’s Black Album, the producer Dangermouse might have had cause for worry. After all, as a success story, he could no longer afford to hijack classic loops in all their copyrighted glory. Worse, he might have to actually make his own music.

But Dangermouse swiftly proved adroit in that endeavor, producing records by MF Doom and the Black Keys, and ushering in the mega-hit “Crazy” by Gnarls Barkley. For his latest endeavor, Rome, released this week, he allows Italian soundtrack composer Daniele Luppi to score the textures while Jack White and Norah Jones supply vocals. It’s a record that keeps very strictly to its theme of a spaghetti-Western soundtrack for the new century, with all the slow toms, wordless vocals, fuzzed bass and reverb guitars one might expect.

What one doesn’t expect is Jones and White to be so perfectly suited to such an unusual project. While one might be able to envision “Two Against One” as a mellowed White Stripes B-side, for the most part the two vocalists are out of their element, but thriving. Without them, the album would have dragged. Guess it’s a good thing that Dangermouse made some friends in high places after all.