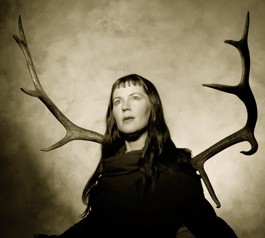 For every door that closes, says the old adage, a new one opens. This weekend in Sebastopol, none other than Joan of Arc will be on hand to open the door.

At the intersection of Main Street and Bodega Highway, the longtime home of the Sonoma County Repertory Theater, a new era begins this weekend for the little theater on the corner that closed in January when the Rep announced it was folding after 17 years. Reconceived now as the home of a consortium of local theater companies (“Rep Rising,” Feb. 23), Main Stage West has already hosted a small number of single-night events. This Friday’s opening of D’Arc, Woman on Fire, presented by the performance art troupe First Look Sonoma, marks the first multi-night run of a fully produced show.

“It’s a truly significant moment,” says Beth Craven, producing director of Main Stage West. “First Look Sonoma is one of our primary companies in residence at Main Stage West. This show is, I think, something completely different than most of the things we see in this area. It’s truly revolutionary theater, and I think it will really surprise and capture the imagination of everyone who sees it.”

D’Arc, written and performed by singer-actress Amanda Moody, is a one-woman-show with live music telling the story of an agoraphobic woman whose daughter has disappeared while working overseas in a war-ravaged country. Through a combination of music, text, and physical performance, Joan of Arc appears to counsel the grieving woman through a transcendent series of visions.

A significant element of the show is the original music by Jay Cloidt, fusing elements of Medieval chant and hymns, modern gospel and bold electronica. With live cello performed by Elaine Creston, the show is directed by Missy Weaver and produced by John Duykers.

It’s the married team of Duykers and Weaver who formed First Look Sonoma, inspired by earlier “chamber opera” collaborations in San Francisco. Duykers is a renowned opera singer (he originated the role of Chairman Mao in John Adams’ Nixon in China), who now lives in Sonoma County.

“John and Missy have always had a passion for original theatrical work,” says Craven, “and they’ve been trying to get something started in this county for some time. We thought they made a really good match for what we are trying to do at Main Stage West, and this show is an incredible way to introduce their work to a new audience.”