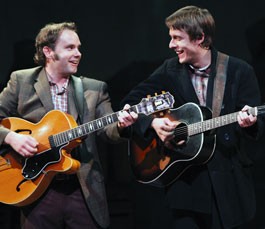 As the summer begins, appreciative North Bay theater audiences have been talking up a handful of truly extraordinary local musical performances. Many of these are stand-out turns in larger ensembles. At Petaluma’s Cinnabar Theater, Sacramento-based soprano Carrie Hennessey is nothing short of sensational in Tobias Picker’s heart-rending opera Emmeline, a smart, devastating work in which Hennessey proves to be as gripping an actress as she is a singer. In Sixth Street Playhouse’s Rent, actress Stephanie St. James brings so much raw passion and dynamic focus to the part of Mimi that she almost eclipses the other fine performers she shares the stage with.

Something quite different is happening at the Marin Theatre Company, where Woody Guthrie’s American Song just opened. Under the direction of Peter Glazer, who also created the show, the entire ensemble works as a finely tuned unit, with all five featured performers equally good. In fact, when looking back on the show, it’s nearly impossible to think of the cast in terms of individual actors and singers. Backed up by a first-rate onstage band, Lisa Asher, Berwick Haynes, Sam Misner, Matt Mueller and Megan Pearl Smith all work as one, each taking up the autobiographical thread of Woody Guthrie’s life, tossing it back and forth like a football team moving the ball toward the end zone.

The show, a revival of the show Glazer originally presented in New Hampshire 25 years ago, is a musical-theatrical collage, an artful overlapping of Guthrie’s songs and writings, brought to life in a series of vignettes showing how Guthrie’s songwriting skill grew during the tumultuous 1930s and ’40s.

This is not a simple biographical drama. Instead of listing the basic facts of Guthrie’s life, Glazer gives us only the details that support his goal: to illustrate the ways that Guthrie’s earliest encounters and experiences shaped the way he saw himself as a songwriter. From Depression-era railroad cars and tent-city jungles to wartime California and New York City, American Song presents an evolution of America right along with Guthrie’s emergence as America’s original folk troubadour.

The songs, many of which work as little “scenes” unto themselves, are loaded with emotion and sadness, frequently crossing into chills-up-the-spine territory. On opening night, a conspicuous low-energy vibe among the cast, ironically, only added an additional sense of melancholy to songs like “The Grand Coulee Dam,” “Pastures of Plenty,” “Ludlow Massacre” and “Deportee.”

What comes into view by the final, stirring performance of “This Land Is Your Land” is a man who did much more than write songs. As Woody says himself in the various voices of the cast, these songs are taken from the voice of real Americans. Once put to music, the people need to take them back, and sing them with all their hearts. In Woody Guthrie’s American Song, you’ll want to sing along from beginning to end.