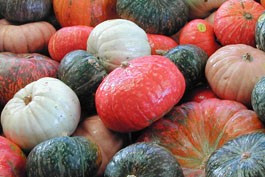 When the days are dark and short, squash brightens the kitchen

Winter squash is a well-named fruit. It keeps all winter long and makes great cold-weather comfort food. The warm, buttery flavor adds to almost any dish, sweet or savory.

First cultivated from wild squash by Central American Indians 10,000 years ago, this authentically American food was initially valued for its seed, as the bitter flesh was unpalatable. Today in Central America and Mexico, recipes based on squash seeds, like mole, are still popular.

It took many generations of indigenous seed savers to craft the sweet-fleshed squash we know today. That some Indians were buried with a squash stash to feed them in the next phase of their journey speaks to the importance of this crop, which migrated north and reached the East Coast before the colonizers, who survived harsh winters on it and shared it with Indians on Thanksgiving, according to American lore.

Since then, squash has found its way to most parts of the world, where winter squash is widely known as “pumpkin,” a name that in American English is reserved for but one variety of winter squash.

Thanks to its high carbohydrate content, winter squash can serve as the base for the meal. Like rice, bread or pasta, it can be the substance to which the saucier elements are applied. Or it can be the sauce itself, either as a bit player in, say, a coconut curry, or as the body of the sauce —like the sauce in the enchilada recipe below.

Squash can be made into soup, spread, dip or salad dressing; it can be baked into a cake, or baked with custard inside. It can be incorporated into almost anything, or it can be left entirely alone. A baked delicata on the half shell, left to cool on the stovetop, needs nothing at all, not even a utensil. Hold it like a piece of pizza and eat it, skin and all. It could be your entire meal.

For a side dish, cut a winter squash into one-inch chunks and drizzle with olive oil, salt and pepper. Bake at 350 degrees, stirring occasionally, until the chunks are crispy on the outside but still creamy on the inside. Eat these chunks with whatever’s for dinner. The next day, toss them in your lunchbox. Toss them in your salad. Toss them into a hot pan with bacon grease, fresh garlic, prebrowned meat, and serve over rice with soy sauce. Or brown them in olive oil, push them to the side of the pan and scramble in a few eggs.

And then there’s pumpkin pie, which can be made from any winter squash. Years ago, some friends and I had a pumpkin-pie business. We were always testing different recipes and always had tons of half-eaten pies lying around. That’s when I proved, scientifically, that it’s possible to live for days, happily, on nothing but pumpkin pie.

We made pies from blue hubbard, kuri, buttercup, pumpkin, kabocha, acorn, delicata and sweet meat squashes, and we had a different recipe for each variety. Starchy kabochas require more eggs and cream, for example, while the sweet and buttery delicatas need less. Sometimes we used classic pumpkin pie spices, like mace, cinnamon, nutmeg, allspice or cloves. Sometimes we mixed in chocolate chunks.

Here is a basic squash pie recipe, which you can use as a template and doctor to your own specifications:

Cut the squash in half, scoop out the seeds and guts, saving seeds for roasting with salt, pepper and olive oil. Place the halves face down on a baking tray with a quarter-inch of water on the bottom, and bake at 375 degrees until a fork easily pierces the flesh, about 45 minutes. Remove from the oven and cool.

For each pie, scoop out two cups of squash flesh and combine with half a cup of cream and 3 to 4 eggs. Sweeten to taste. The average recipe calls for about a cup of sugar per pie; maple syrup works, too. Add the pie spices of your choice, up to a half-teaspoon per spice. Add nuts, chocolate or whatever else you think will taste good. Taste often to make sure it’s right. For a fancy variation, separate the eggs, mix the yolks into the filling, beat the whites stiff and fold them into the final filling.

If you want a savory pie, skip the sweetener. Brown your meats, cook and season greens, potatoes or whatever other items you want. Add a layer of squash, then the filling, maybe some cheese. Cover with more squash filling and bake.

Sweet or savory, bake your pie about an hour at 300 degrees, until the filling is firm.

Bake a squash as for pie. Sauté one shallot, minced, and three cloves garlic, chopped, in olive oil. Add a cup of squash, season with a teaspoon each of nutmeg and paprika, and salt and pepper to taste. Stir often. Whenever it starts to stick, deglaze with Madeira or sherry. After 15 minutes on medium heat, add a cup of chicken stock. Cook until thick. Turn off the heat and let it cool, then purée the sauce in a food processor.

Roll or fold the chicken mixture into corn tortillas and pack into a baking pan. Pour the sauce over them, and bake for 15 minutes at 350 degrees.

You could make these enchiladas with leftover turkey the day after Christmas, or any day, really. As far as I’m concerned, when squash is in the house, every day is Christmas.