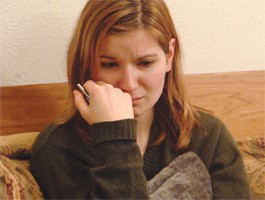 I‘ve been sitting at the counter of Mr. Mom’s cafe in Petaluma for three hours. The crossword puzzle in front of me is a giant splotch of ballpoint ink in 19 layers. I’ve discovered 12 new ways to scratch my head, and my coffee cup has been refilled eight times. My mind is racing but my body must stay still. I figure I’ve got about an hour of inward motionlessness before I can get up and leave.

So goes the crash course I received in the world of independent filmmaking, having agreed to appear in Darwin Meiners’ feature film Fairfield, Idaho.

OK, OK, it’s not really a starring role. There are no awards for Best Guy in the Background with His Head Turned Away. But Meiners assures me that if I want to truly understand the experience of shooting a movie, there’s no other way but to jump right in. And sit.

The setting here is down-home. Country music plays on the stereo while a frizzy-haired waitress in a pink sequined T-shirt wipes down the counter. But surrounding a vinyl booth in the corner are Meiners and his crew clustered around film cameras, light filters and boom mics. Producer Jeremy Moore rushes around between takes, shooting Polaroids for continuity, while director of photography Jon Lohne and production manager Steve Aja try to rescue a fizzled microphone cord with gaffer’s tape.

It’s not exactly an expensive-looking set, until one of the actors pulls some props from a duffel bag: a gun, a bag full of white powder and an enormous wad of bills, all twenties. It must be $5,000, at least. Sensing my surprise, Meiners leans over and lets me in on one of the resourceful tricks for shooting a film on a threadbare budget.

“We needed a bunch of money,” he whispers, “so we Xeroxed it. If we get pulled over on the way home, we’re fucked.”

The modus operandi for making Fairfield, Idaho has been this exact sort of do-it-yourself approach. But with no budget or formal film training, Meiners and his tireless crew have produced a film of remarkable depth and impact. The film premieres April 21 in Santa Rosa.

Fairfield, Idaho opens with a slow pan across an empty field of tall, dry weeds. The camera closes in on a white house, and while the sun sets, a quiet moment is allowed to hang, suspiciously. What breaks this opening silence sets in motion the story of Dayton Miller–his distressed relationship with girlfriend, Maddie, his desire to be a hero and, overridingly, his belief that because of what happens in the white house, he is shackled with a family curse from which there is no escape. When we meet him, he is completely broke, behind on the rent and drowning in a sea of alcohol.

In a last-ditch attempt to salvage everything, Dayton–portrayed to boozy perfection by Paul Hoffmann–raids his estranged mother’s trailer. A wide-angle lens and an effective score provided by the Velvet Teen’s Judah Nagler give the heist an added Rififi-like tension. Dayton is looking for money, but when he ransacks the trailer, he makes off instead with a large bag of crystal meth.

The story that unfolds of Dayton’s quest for redemption achieves a maturity and subtlety rarely seen in no-budget independent film. Even when nothing very much at all is happening onscreen, the viewer feels the tense state of mind of the movie’s characters. Flourishes of focus and angle act as a cracked window into Dayton’s scrambled conflict, and montages abound for a sense of time and atmosphere.

In rounding up a serviceable cast, Meiners has found some unknown gems. As Maddie, Larissa Kasian is excellent, particularly in her pleading with Dayton to return the meth and come home. In these scenes, Hoffman’s natural detachment works perfectly. (“You just said that you loved me, and I just said that I knew I was wrong,” he tells her in the middle of a heated argument, hoping to settle the issue. Ah, the logic of the jilted male.)

Of course, those who live locally will find plenty to recognize, including Grizzly Studios owner Roger Tschann as Dayton’s drug-dealing friend Kyle. Tschann literally drops into the frame to counter Dayton’s festering psychosis with his wise-cracking composure. Two bumbling hit men come into play, and in a dingy hotel room the conflict builds to a nail-biting climax.

Fairfield, Idaho will undoubtedly be applauded at its premiere this weekend. But Meiners is hoping for a different kind of reaction.

“If someone could get in an argument about what the ending means,” he hopes, “that would be awesome.”

Darwin Meiners, 36, has dark brown hair and a lean, healthy gait. A jack-of-all-trades songwriter, promoter, husband, company vice-president, father, singer, guitarist and now filmmaker, he embodies the ideal of accomplishing anything simply by putting one’s mind to it. By turns insightful and sardonic, he talks with an almost impossible confidence, even when addressing his own limitations.

Prior to Fairfield, Idaho, Meiners had made exactly one feature film, an over-the-top secret-agent kung-fu zombie farce called Lance Sterling: Off the Case. He’ll be the first to admit it was intended solely to amuse. “Instead of trying to hide the fact that we had bad actors, bad lighting and a bad story,” he recalls, “we just made it even more apparent by embracing our weaknesses.” The movie looked as if it cost a few hundred dollars to make.

Though Meiners had made short films before, filming Lance Sterling gave him an itch for something more serious and dramatic. He immediately announced a new project, and had started writing a screenplay, recruited a dedicated crew and assembled a cast in less than six months. He still had no money.

“We’ve all seen multimillion dollar movies that are just horrible,” figures Meiners, sitting in a homemade studio in his Santa Rosa garage during a final cut of Fairfield, Idaho. “So it seems like if you get good people–actors, writers, crew and artists–then it’ll be way better than if you get a bunch of money.” Between Meiners and Moore, the project was entirely self-financed, with the exception of two “investors” worth $100 each (one of them was Meiners’ dad). “That’s how I know I’ll probably never be a ‘real’ filmmaker,” he insists. “I don’t like asking people for money.”

With nothing but raw talent, the crew began a weekly regimen of writing, shooting, rewriting, shooting, editing, shooting, mixing, editing and finalizing. The process accumulated its share of sticky situations–a motel owner required bribe money for the use of a dilapidated room replete with real black mold on the walls and an all-too-real discarded hypodermic needle on the floor; makeup artist Dustin Heald applied bloody contusions to an actor who had inadvertently passed out from whiskey. But the toughest obstacle, Meiners says, was realizing what he had gotten himself into.

“I was so unprepared to answer questions from professional actors,” he explains. “You have to find these ways to evoke emotions and portrayals from people without actually asking for it. I had no clue, no idea, and then I had to do it on the spot. And it was really hard. It was totally hard.”

The other down side to having just a four-man crew, Meiners says, is that his own creative flow was often disrupted during shooting to keep everyone on task–acting, he jokes, as “the class clown and the principal at the same time.” But he never felt like throwing in the towel on Fairfield, Idaho. “I just felt like this was a good story,” he insists, “and I wanted to see it through.”

Meiners hasn’t counted up the receipts yet, but he estimates that the 76-minute film cost about $5,000. Nightmares of dealing with Hollywood agents and attorneys are not on his radar; instead, he mentions the enthusiasm he’s received from the chamber of commerce in the actual city of Fairfield, Idaho. The film will hopefully screen at eventual festivals, but as of yet Meiners has no plans to even release it on DVD.

“I’d be happy to show it one time and never show it again, to be honest with you,” he says. “Some people play poker on the weekends, some people play golf. We make movies. It’s just what we like to do.”