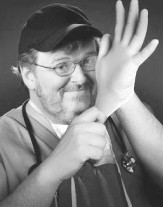 Michael Moore gets it right with 'Sicko'

Accounts of life under totalitarianism suggest a general rule: Those dictators who forbid everything are easier to live with than the dictatorships where you never know what is allowed and what is forbidden. Nothing wears out the soul faster that constant questioning and worries.

Life under managed healthcare is the latter kind of system. And in America 2007, our healthcare mess is just one more faith-based initiative: pray to your God that you don’t get sick. Meanwhile, as the premiums soar, the airwaves hum with counterintuitive praise of the way it stands today. Absolutely, sure, no question: thrive–if you can afford it.

Warming to the subject, our legislators assure us that a single-payer health system would be a bureaucracy. A bureaucracy? When was the last time they tried telephoning an HMO? Now Michael Moore steps in to stir up this already smoking-hot issue with the infuriating and funny documentary Sicko.

Rather than weep over the 50 million uninsured, Moore gleans horror stories of people who were so certain that paying health insurance was going to keep them covered. The narratives here range from the comic to the horrific. One lady was billed for not getting pre-approval for an ambulance ride (she was unconscious following a car accident). A patient who lost an argument with a table saw was asked to choose which finger should be saved. An infant died of cardiac arrest after being evicted from a hospital.

The HMOs’ myriad ways of wiggling out includes denying a patient for being too fat or too lean. Moore unscrolls a Star Wars-style title crawl to list dozens of preexisting conditions. One turns out to be a yeast infection.

Since he edited down his documentary polemic from the 500-hour original, Moore has plenty of anecdotes. As always, he brings in found footage from the scrap heap: antique documentaries; a snippet of Soviet musicals; and a recording of Ronald Reagan stumping against socialized medicine in the 1950s. One 1971 White House tape shows Nixon and John Ehrlichman discussing the approval of for-profit HMO systems.

Sicko‘s disinterment of Nixon and Reagan, two old demon figures, is one of the few clearly partisan moments in the film. Unless, that is, you count the opening shot: an irresistible malapropism by Dubya on the subject of tort reform. Yet Moore also singles out Hillary Clinton for taking donations from Big Pharma.

This collage grows into a story of long-lasting injustice. Not only is this the juiciest subject Moore has ever chosen, Sicko is his most visually accomplished movie. Being right about Iraq must have done something for his self-confidence. He’s become a more focused filmmaker than he was in Roger & Me.

Having spent so much time as an object of controversy, he also now asks the right questions, anticipating the objections about the cost of single-payer health. Moore quizzes both a British physician and a French taxpayer, asking how they survive systems that supposedly oppress the doctors and bankrupt the patients. The man did his homework; and what’s stressed here is how single-payer is an agreed-upon part of the social contract. One interviewee, the old Labour (and proud of it) MP Tony Benn reminds us that even Margaret Thatcher refused to un-build British National Health.

Maybe it’s politically questionable to storm Cuba with sick Sept. 11 volunteers who were denied coverage in America as he does. But on the mere level of visuals alone, the scenes open up the picture; they look good. Moore, the bugbear of the blogosphere, will get his usual roasting–for demagoguery, for sentimentality, for his willingness to accept a showpiece Cuban hospital at face value. True, France provides science-fiction levels of healthcare and social services–including free house calls–but of course France also struggles with a Pandora’s box full of social problems. The easily impressed may only listen to the part about how good our counterparts have it in Canada and overseas.

In the end, one movie isn’t nearly enough. Sicko needs to be just a part of a study of our peculiarly backward national misery. Say what you will about Moore, he’s taken an issue and placed it where it cannot be ignored or swept off the table as it was in 1992. Just as An Inconvenient Truth forced the acknowledgment of the issue of global warming, Moore has ensured that his fellow Americans will know they’re getting fleeced, hosed and COBRA’d.