.A Square Is Born 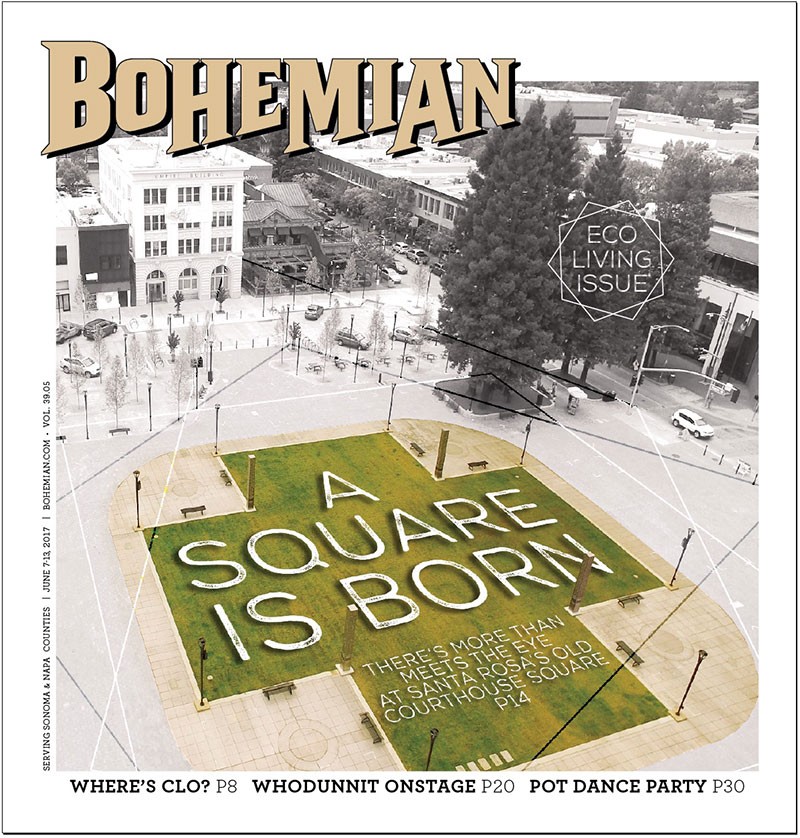 It’s a hot Friday afternoon in Santa Rosa and Old Courthouse Square is not yet an urban oasis of cool comfort, but the sycamore trees are starting to grow in as lunch-goers and downtown denizens make their way through and around Santa Rosa’s new center. The hot dog man is busy on the corner of Mendocino Avenue and Fourth Street. The place to be is on a shady bench near the remaining redwood trees that weren’t removed as the $10.5-million Square moved from concept to
build-out.

Some 30 years after the downtown business community conjured a reunited Courthouse Square, here it is, and it’s frankly too easy to throw shade on the shadeless expanse of civic space—but give it time. Designed as a multi-use civic gathering space, the Square is purposefully single-level and built without a gazebo or a permanent stage to prevent any restrictions for potential events.

“The idea was to create an open space for an event planner to come in and make it their space, reimagine it, re-create without having anything already established,” says Jaime Smedes, Transportation and Public Works marketing and outreach coordinator with the city of Santa Rosa.

The Square truly is a blank and inviting palette, says Jonathan Coe, director of the Santa Rosa Metro Chamber of Commerce, whose offices are along the Square, ready to be painted at the discretion and direction of the citizens of Santa Rosa and a proposed business district that would give surrounding business owners a role in the maintenance and security of the public space.

Coe says the chamber is in the process of putting together a property-based business improvement district (PBID) “that would enable us to provide services beyond what the city is doing and what it would be doing on its own.” These sorts of business districts were written into California code in 1994, and allow them to supplant, but not replace, services that are already provided by the city.

One of the key provisions of the law encourages nonprofits to deliver services normally provided by government, as a supplement to those services. These activities may include acting as an intermediary between Square-sitters and law enforcement, but Coe stresses that “it is not our intent to play a private security role per se. The team we hope to have on the streets will be a combination of litter picker-uppers and ‘liaisons’ to the various homeless services . . . so that they can make referrals and contacts, and then also to collaborate where needed [with law enforcement] on quality-of-life ordinance violations.”

There’s been significant support for the business district from merchants around the Square and adjoining blocks, as Coe acknowledges that past efforts to bring businesses together to better manage the downtown transient population “did not work out well.” But he says that because the initiators of the PBID are in large measure the same business owners who have pushed for the Courthouse Square unification, he’s confident the PBID will ultimately prevail. There’s first a process, however, that’s just getting off the ground.

As the PBID is considered, so too is a question: Should Santa Rosans be worried about a nongovernmental organization given wide latitude to manage a public space that was upgraded with public money, and where private security officials will be charged with interacting or engaging with vulnerable, homeless and/or mentally ill persons persons who may be creating a disturbance? Coe says not too worry, as does Santa Rosa vice mayor Jack Tibbetts, who insists that any downtown business district would come with city oversight and ample sensitivity to the rights of all citizens to use the Square.

Courthouse Square’s present, reunified status was years in the making—the Square itself is 133 years old but was bifurcated by Mendocino Avenue in 1967. The original courthouse was destroyed by the 1906 earthquake and a new one built in 1910; that courthouse was taken down in 1966 because it was declared seismically unfit.

That the Square is rather starkly appointed was by design. Jason Nutt, director of the Sonoma County Department of Transportation and Public Works, says the design goal for the Square—which necessitated the controversial removal of 90 trees—was to create a space that was “open, flexible and inviting.”

And right out of the gate the Square hosted the successful Ironman 70.3 Santa Rosa competition, whose organizer said the event was the best it’s seen in North America, says Nutt. Not bad for a brand-new venue.

Before it was redesigned, the Square was less than ideal and contained numerous “hiding spaces” that transient citizens made use of, Nutt says. “That really made people feel uncomfortable,” he says. But the new and improved plaza will be “the community’s living room,” he says.

Lesser-known design details give a sense of the local that’s not immediately observable through a simple stroll across the space. Nutt’s favorite design details are the light features, which are custom-fabricated by celebrated metal artist Michael Bondi.
The fixtures are sheathed in stainless steel and have programmable LEDs that can change color. Each of the lights has the figure of a plant created by Luther Burbank cut into it: the Santa Rosa plum, Shasta daisy, firefly poppy and the white blackberry. Nutt calls the lights the plaza’s “jewelry.”

The current reunification effort dates back to 2004 when a group called the Coalition to Restore Courthouse Square launched a then-quixotic journey that would pay off more than a decade later.

“It’s had quite a long history,” says Curtis Nichols, vice president and landscape architect at the Santa Rosa architectural firm Carlile Macy, which designed and executed the reunified Square. “We’re riding on the shoulders of a lot of people who have been trying to do this for the past 20 years,” Nichols says.

Delays and cost-overruns aren’t an unusual feature of any city-sponsored project, and Courthouse Square was no exception. Wet weather was one of the biggest obstacles, Nichols says.

“The biggest challenge was the tight time frame,” Nichols says. “There was a point in the beginning where it was like, ‘What did I sign up for!'”

Though it’s open to the public, the plaza isn’t complete. Yet to come is a redesigned water fountain on the south side featuring artist Ruth Asawa’s works of history and marine life that used to occupy the site, and an as-yet-to-be-determined art installation on the north side. Funds for those projects have not yet been raised.

But Nichols is proud of what he helped create.

“We took our charge seriously,” he says. “This is arguably the most important public space in Santa Rosa.”

The trees will grow quickly, Nichols says, as he highlights some of the other fun and funky decisions that give the plaza its character.

The permeable paver tiles will minimize stormwater runoff and help meet the plaza’s sustainability goals. One surprise for residents may have been the inclusion of parking around the plaza, with angled lots on the east and west sides that Nichols says are the best practices for new urban design that reflect and enhance a new effort to bring people back to downtown after an exodus that began nationwide in the 1960s.

While Coe and local businesses are putting together their plan to provide security, services and overall management of the Square, he has no intention to use a heavy hand, especially when it comes to programming, which the PBID does not address.

“The programming in the Square at this point will remain with the city and with city parks,” he says. “They have a very clear process for getting permitted. That said, we will put together a variety of programming options that will go through the same process as anyone else.”

Event hosts need to apply for a permit with Thompson, who facilitates the review and approval process. The Square is currently hosting single-day events, such as the Luther Burbank Rose Parade and the IronMan triathlon, which both took place in May. The Wednesday Night Market now runs adjacent to the plaza and on June 7, three couples are getting married at the market.

Interest is in the plaza is high, Thompson says. “I’ve met with several people over the last month or so who see that the Square is now open and want to bring an event there.”

Recreation & Parks has
been drafting a revised permit policy that provides clear guidelines and restrictions for event producers. The revised policy was slated to go before the Santa Rosa City Council on June 6. Thompson hopes these new guidelines will help prevent occurrences like the spray-paint markings left on the paver stones after Rose Parade organizers thought they’d used water-soluble paint. Oops.

“That was just a total fluke,” says Thompson.

Event organizers, she says, ought to apply a minimum of one month, and up to a year, in advance, depending on the complexity of the proposed
event. Outdoor yoga has been going on in the Square since it opened last month, but permits for that don’t take a month to approve, she says, owing to the limited impact on surrounding traffic and parking.

Permits cost $75, though event producers will also have to pay general liability insurance and cover other costs such as reserving parking spaces. You want to serve booze or crank up some propane stoves? That will require additional permission from the city. You want to blow a doobie? Not a good idea.

‘We all see benefits to the PBID proposal,” says Tibbets, who adds that, while city officials are focused on affordable housing, the Roseland annexation, cannabis permits—all while short-staffed—the Courthouse Square business district can pick up some of the slack.

Still, the issue of Santa Rosa’s homeless population swirls around the future of Old Courthouse Square—and Tibbets says for that reason “everything is in kind of a limbo,” as the city awaits the petition and proposal. “They need to whip up the votes to actually form this thing,” Tibbets says, even as the city progresses on an anti-homeless plan that’s yet to be fully implemented. It appears that there’s a little bit of “wait and see” going on between business and the city.

“It’s true the business community didn’t want Courthouse Square to be a transient place for the homeless or indigent,” Tibbetts says. “But attitudes are changing around the Square once it opened—we are seeing homeless people utilize it, as they have a right to. But they are not, and have not been, an unwelcome presence.”

He says the business district proposal would be subject to review by the city council. Under state law, the PBID has to be renewed every five years, among other conditions of the designation. And if the group was in breach of contract, the city “would take control of Courthouse Square at any given time. This is not a gift of public property to private entities.”

Coe is aware and comfortable with the PBID’s proposed role,
but even moreso, he’s excited about the possibilities as he lists the ingredients for a well-managed plaza. The only
missing ingredient is time. He ticks of “the music concerts, a Friday-night market, special events, a place for First Amendment rights to be asserted. This is essentially a place for the community to convene and hopefully with that vitality comes increased business activity downtown. Stick around, enjoy the restaurants!”