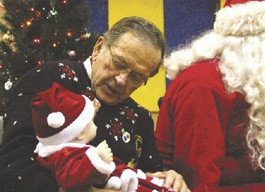 A Series of Tubes

Net neutrality and those fools on the Hill

It’s been a long, hard summer for Sen. Ted Stevens. Shortly after the chairman of the Senate Committee on Commerce, Science and Transportation passed a major telecommunications bill without a Net neutrality provision (it lost by an 11-11 tie), the Alaska Republican found himself the laughing stock of the Internet–and The Daily Show with Jon Stewart.

It all started with a long-winded rant against Net neutrality during committee hearings on an amendment offered by Sens. Olympia Snowe and Byron Dorgan.

As reported in these pages on June 28 (), Net neutrality is a core concept upon which the Internet was founded: that all of the data traveling the Internet–every website, MP3 file, vlog, etc.–should be treated equally. It’s a concept at risk because the FCC recently removed “common carrier” restrictions on telephone companies and cable companies, which means–in the absence of legislation to the contrary–they would be able build a superfast network and charge a premium for access to it. In other words, the Net would be a high-speed toll road for paying customers only.

“The Internet is not something you just dump something on. It’s not a truck,” he explained to his colleagues in the Senate, seemingly channeling George W. Bush’s grasp of both logic and elocution. “It’s a series of tubes. And if you don’t understand, those tubes can be filled and if they are filled, when you put your message in, it gets in line and it’s going to be delayed by anyone that puts into that tube enormous amounts of material, enormous amounts of material. . . . I just the other day got, an Internet was sent by my staff at 10 o’clock in the morning on Friday, and I just got it yesterday. Why?”

To Jon Stewart–the primary news source for the under-30 set–the reason Stevens didn’t get his “Internet” was obvious: “Maybe because you don’t seem to know jack shit about computers or the Internet,” he deadpanned that night. “But hey–you’re just the guy in charge of regulating it.”

Stevens’ status as laughing stock of the Internet probably didn’t help matters in the hall of the Senate. As the Congress broke for its August recess, Stevens was not having much luck in drumming up support for his bill without meaningful Net-neutrality provisions.

In an election year when voters are making clear their dissatisfaction with Republicans, majority senators are clearly nervous about Stevens’ bill.

Sen. Lincoln Chafee, R-R.I., a moderate Republican fighting to fend off a strong primary challenge, is opposed to considering the bill without debate on Internet protections. “I’m starting to hear about Net neutrality back home, and I’m not on the [Senate Commerce, Science and Transportation] committee, so I’m still learning about the issue,” he said Roll Call, the Capitol Hill newspaper.

Sens. Rick Santorum, R-Penn., and Mike DeWine, R-Ohio, are both looking at tight races and are concerned about supporting the bill that passed the committee, according to Roll Call.

Meanwhile, events that look suspiciously like corporate censorship continue to crop up. Ordinary citizen Andrew Raff wrote a little acoustic-guitar ditty set to Stevens’ infamous words and posted it on his MySpace.com page. It mysteriously disappeared. MySpace said the page was removed because of copyright and trademark violations. But the song was Raff’s own composition; the words were Stevens’ and thus public information. There were no copyright violations.

According to MySpace, it was just an administrative error, a little overzealous deletion. Surely the fact that MySpace is owned by Rupert Murdoch’s News Corp., a key beneficiary of the Senate action against Net neutrality, would have nothing to do with it. Neither would the fact that Murdoch is a leading contributor to Stevens’ campaign war chest.

Art Brodsky of the D.C.-based information advocacy group Public Knowledge doesn’t buy it. “Of all the God-knows-how-many separate postings on MySpace, this one was singled out,” Brodsky wrote online. “You can’t fill out an online form to get something deleted; somebody had to make a specific call on that specific song. Given all that has been happening with Stevens, I just have a very skeptical view of [this as a] coincidence.” After articles on the MySpace evaporation were printed in Wired News, the New York Times and the Washington Post, the site and song were just as mysteriously reinstated.

Earlier, Google vice president Vint Cerf, one of the founding fathers of the Net, warned that the company would not hesitate to file an antitrust lawsuit if they suspect the telcos are disregarding neutrality. Speaking at a conference earlier this month, Cerf said, “If the legislators . . . insist on neutrality, we will be happy. If they do not put it in, we will be less happy, but then we will have to wait and see whether or not there actually is any abuse. We will simply have to wait until something bad happens, and then we will make known our case to the Department of Justice’s antitrust division.”

And so the Senate adjourned until after Labor Day with no action on the Stevens bill and weak prospects for any action before the election in November. “I don’t think anybody wants to see this before the elections,” said Maura Corbett, spokeswoman for It’s Our Net, a coalition backing Net neutrality.

“Even those lobbyists pushing for the bill concede that it is unlikely it will get floor time until after the elections,” Roll Call notes. “At that point, they said, Stevens likely would turn to a lame-duck strategy, possibly breaking off pieces of his broader bill and trying to attach them to spending measures.”

While this Congress will be in session for two more months before the election, the odds are looking very long for passage of Stevens’ bill without Net neutrality. That result is a testament in the end to the power of sustained, massive, politically astute activism. It was not the lobbying of Google and eBay that made a difference, but the fact that, in the long run, representatives and senators were hearing about the issue on the home front. With Republicans running scared of the midterm elections, key politicians were unwilling to go against popular sentiment on this one.

But to some degree, it’s also a reminder that everything happens in real-time online. In the pre-Net era, Stevens shooting himself in the foot with his rambling about Internets and tubes would have gotten about one inch on page 27 of the Washington Post, if that. Instead, it hit the Internet instantly and was mocked relentlessly in various mashups of song, video and PowerPoint. It went around the Net so many times that even TV took note.

If this bill does in fact die this year, it will be at least in part a death of a thousand online humiliations.