.A reflection on online home-decor inspiration 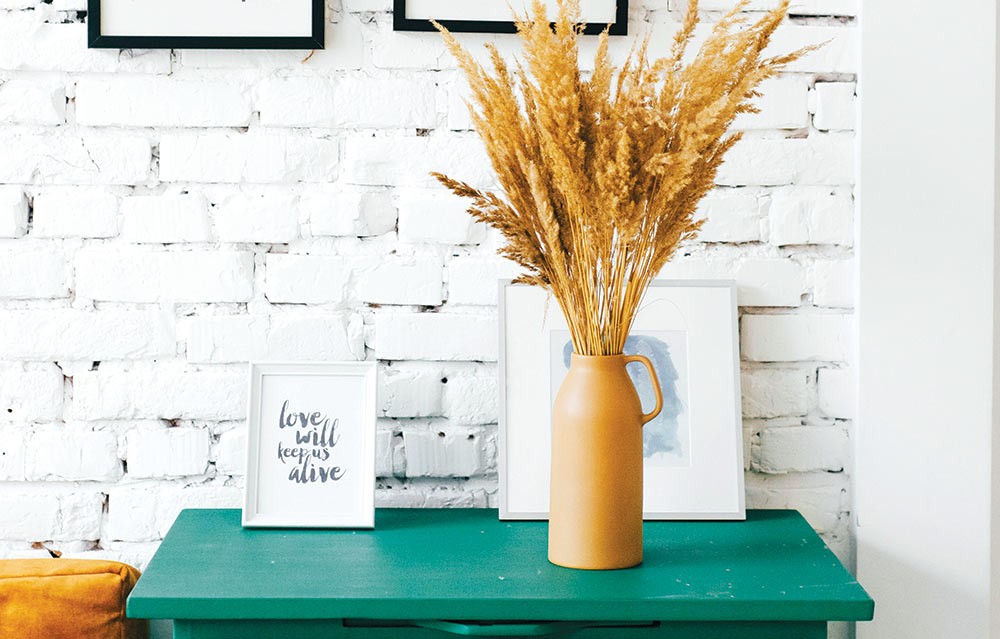 My friend Heather and I met at UC Santa Barbara during our junior year, in Literature of the Reformation (out of respect for her privacy, we’ll keep on a first name basis here).

I used to wave to her as she rode around Isla Vista on her beach cruiser in a long peasant skirt and pink Jellies, her long strawberry curls trailing behind her in the breeze. She smiled a lot. Heather was one of the few students I knew with her own room in a real house, with a new mattress and high-thread-count sheets.

At 20—and decades before Instagram and Pinterest and Pottery Barn—she had a flair for pattern, color, texture and quality second-hand clothing. We both thought David Nagel prints were not only ugly, but the sign of an undisciplined mind.

I saw her last week for the first time since the March lockdown. Honoring our tradition, we went thrift-store hopping and then ate lunch at El Molino, both of us wearing masks and feeling frayed around the edges with too many daytime inhabitants in our respective domestic spaces.

“So, how much time do you spend looking at Zillow?” I asked in the dishware shelves.

She laughed. “Omigod. How did you know? Too much.”

“Have you seen that house in Bolinas?” I didn’t even have to specify which one.

“Bolinas isn’t happening for us,” she said. “I like Fort Bragg.”

Sometimes I spend hours in the listings. It seems like everyone I talk to these days is on Zillow.

“You can look at the inside of people’s houses,” I said. “Some of the desert houses are wild, but I’m still seeing balloon curtains in homes.”

Alone-time has all but disappeared for many of us, while for others life has become a 24/7 dialog with CNN and crane flies. With spouses and partners working from home, with adult children returning to the nest with IKEA bed frames and plastic tubs, and with thrift stores so backlogged with donations that many aren’t accepting more, the domestic sphere can feel like life on the inside of a hamster ball. Residents have taken to putting items on the sidewalk in hopes that their trash is someone else’s treasure. Most often it’s not.

But for creative types like Heather, the lockdown has unlocked potential to reimagine the home, to fearlessly shirk design trends and to turn domesticity on its head without worrying about the Joneses. While the home has been repurposed as an office, a gym, a daycare, a studio, a campus, a greenhouse, a test kitchen, a Zoom stage and a dojo, it’s also being reinvented. Heather describes her home decor as somewhere between “cabinet of curiosities and opium den.” She credits her matrilineage.

“My grandmother and my mother were very ahead of their time, very avant garde in their tastes,” she says. “My great grandmother was from Guadalajara and my great grandfather built custom furniture in Philadelphia. He mixed traditional furniture design with elements of Mexican folk art. Both my mother and I inherited a love of objects. For example, some of my favorite things in my house are on my desk; a brass crab, an inkwell from my grandmother, a handmade silver bookmark from my grandfather.”

Heather’s house is made from both materials and memories. She doesn’t shop for new stuff, and she doesn’t follow trends.

“The Marin farmhouse chic is just stamped out,” she says. “I’ve always been into repurposing, restoring and rule-breaking; I like every room to evoke memory and emotion when you walk into it. My daughter goes through things that I put away, and helps me reacquaint myself with what I have. The pandemic has given me a certain sort of freedom to experiment with a style that is more for me than other people since nobody is coming over to look or judge. There is a need right now, I think, to be surrounded by things that provide comfort—there is so much that is leaving and going out of our lives, and fading. I keep a lot of rocks.”

Comfort is often quite different than luxury.

In The Poetics of Space, Gaston Bachelard writes, “We comfort ourselves by reliving memories of protection… Memories of the outside world will never have the same tonality as those of home and, by recalling these memories, we add to our store of dreams…” Thus spoke Zillow.

“We are tired of our own spaces,” Heather says. “With websites like Zillow, you can vividly imagine these changes, which can be both positive and negative.”

Zillow is as full of $25,000-a-month coastal luxury rentals as it is of foreclosures, drive-by photos with the occasional shot of sagging curtains in the windows and sad, dead garden shrubs.

You might just want to stay put after all that snooping.

In my house, we’ve been letting kids paint the walls for years. In the living room four teenage girls painted a mural, an homage inspired by Klimpt’s “Tree of Life” and populated by the characters in Miyazaki’s Princess Mononoke. In one of the rooms my older daughter hand-painted wallpaper with a design by French textile artist Paule Marrot. I painted a mural in my kitchen I found on the design blog “The Selby,” and have used work by Eugène Séguy, Ukrainian artist Polina Rayko and Vanessa Bell. The boundary between home and studio for artists is often poorly defined. I’ve always thought it’s better to paint the walls than climb them. And speaking of boundaries, let’s not forget the great outdoors, brought indoors during our extended stay inside. Shelter-in-place has been a boon for nurseries. I myself have acquired five banana trees.

In a recent Washington Post article on the rise of the houseplant, gardening columnist Adrian Higgins writes, “… I now sit and watch current affairs and news programs on the TV, not for the perspicacity of the pundits, but to see how they’ve decorated their home offices. Some of the wall art is so bad, it’s good, but I’m on the lookout for the quantity and quality of the vegetation. Tip to commentators: Enough of the bookshelves — we know you’re smart; load up on far more houseplants and tropicals.”

As if we weren’t buried enough in our own long-neglected crap—both material and psychological—many women my age, including myself, have cared for, or lost, parents during these last few grueling months and now find ourselves not only dealing with grief but acting as lead curator of our parents’ possessions. Maybe for the first time, people have started to contemplate in earnest the total life cycle of things, as the life cycle of everything else becomes more precarious.

An artist friend who recently lost her mother told me, “I’m torn between the obligation of honoring my mother by taking care of her things and the burden of holding onto belongings I might not love. Do we all want to be perpetual curators of our own lives? I don’t think so—one thing the pandemic has taught us is that our time here is so limited. I’ve had to confront the reality that some of my clutter is not so creative. Swedish death cleaning is on my mind a lot.”

Bachelard agrees. “It is better to live in a state of impermanence than in one of finality.”

In the past, peeking inside a seaside mansion in Pebble Beach or a Napa Valley estate might have evoked feelings of impossible outsiderness and envy. Now these palatial spaces resemble empty hotel lobbies, halls of mirrors filled with designer furniture and fixtures that the future has neither room nor desire for; these are the lonely hunting grounds of the Wendigo, rooms appointed with store-bought grandeur on an inhuman scale when humanity is what’s in order. So much clutter is not going to just disappear when the new owners move in. Maybe after the thrift stores open donations back up, they’ll take what’s left.