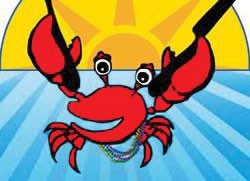 The bib, the lemon, the fork, the stringy sea-flesh of unusual texture—ah, yes, it’s still crab season here along the coast. And though crab feeds come and go, largely advertised via plywood placards on the outskirts of small rural towns, this week’s feed at Lagunitas benefits Cinnabar Theater.

Indeed, the theater with the steep loping driveway doesn’t just open its mouth and sing—it also open its mouth and eats. The Cinnabar’s Chili Cook-Off is the stuff of legend, and their Taste of Petaluma event gets more popular by the year. So it’s no doubt they’re gonna open the curtain on a fine second-annual crab feed. Salad, bread and desserts round out the menu, with Lagunitas on the sudsy stuff.