With online courses and overcrowded classes, cheating in college is easier than ever 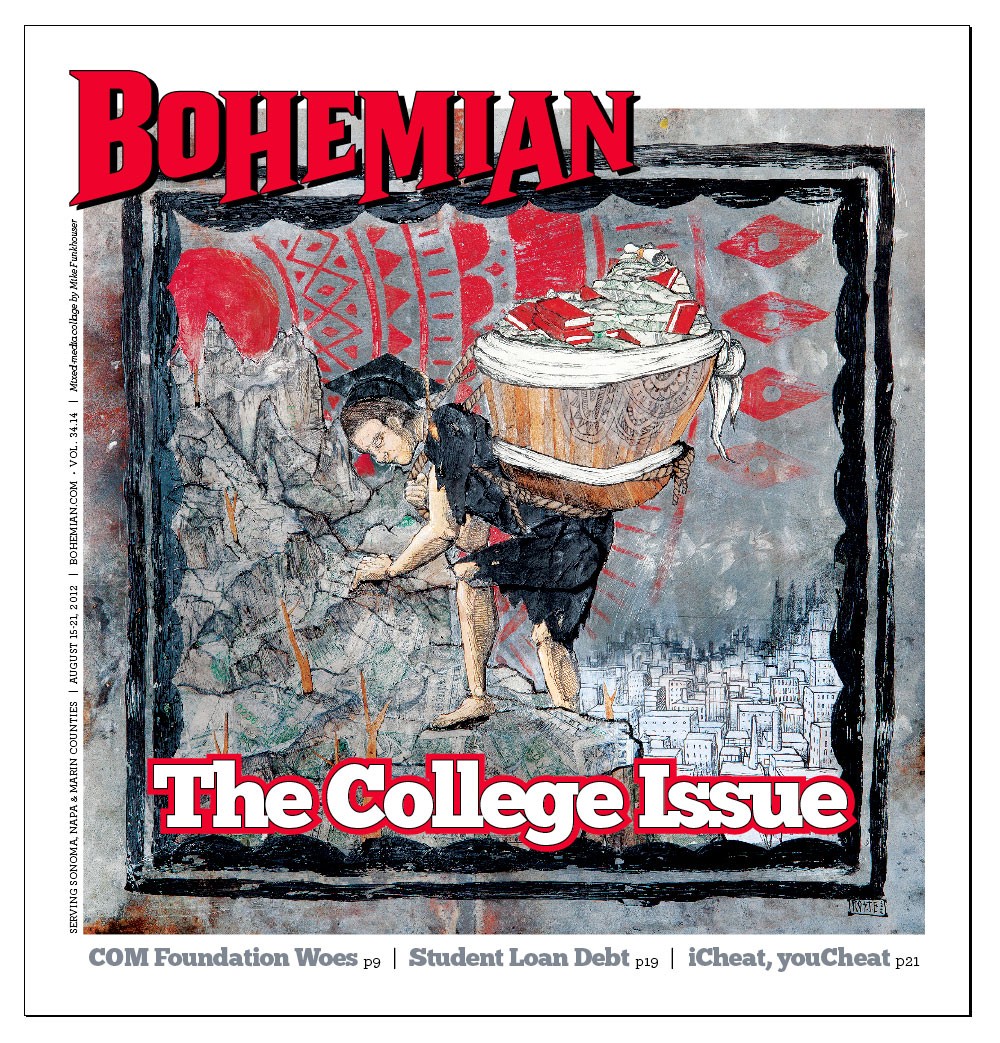 Note: For what should be obvious reasons, students’ names have been changed for this piece.

“Jane” was elated when she received her admissions letter to her first-choice college. She’d been working toward this moment for the better part of her high school years, and now the reward was in her hands. When she arrived at her dorm, and as her parents tearfully said goodbye, Jane vowed to work hard to get the most out of her college experience.

But just three weeks into her first semester, Jane became overwhelmed with assignments, upcoming tests, her part-time job and getting around in her new town. One night, when even breaking down in tears seemed too mentally taxing, a ding sounded from Jane’s email. Upon opening the email, like a beacon of hope, she found the answers to her first online biology quiz. Without so much as an ethical question mark popping over her head, Jane used the answers for the quiz and received a more than passing grade. That night she slept better than ever since starting college, and by the end of her first semester, she not only passed all of her classes but learned all about the dirty secret of cheating.

Before you ask, the answer is no, I am not Jane.

When I started college, cheating was merely a concept to me, and not an attractive one. If the ethical questions surrounding cheating weren’t enough, the threatened consequences were. Yet coming to the end of my college career, I’ve learned a thing or two about how a good majority of my fellow students survive college. They drink a lot of caffeine. They pull all-nighters around finals week—sometimes with chemical help. They beg for extra-credit assignments when panic sinks in a couple weeks before the end of the semester. And sometimes they cheat on a test.

At this point, with the spread of information online, cheating is almost as traditional to the college experience as fall football games or your first kegger at Phi Sigma Kappa.

“Technology has restructured the way courses are taught,” says “Austin,” a former Santa Rosa Junior College student who will be going to Berkeley in the fall. Students no longer have to go to school to go to school. Online classes, exams and lectures make creating a schedule easier—and render cheating rampant.

Austin, who objects to a heavy reliance on online education, nonetheless makes no qualms about cutting corners in these classes. “I took an online class in high school, and on exams I could just pull up another tab,” he says, “and look up the answer.”

The news that cheating occurs on college campuses isn’t groundbreaking. But the ways in which students are cheating is. “I’ve caught students looking up test answers on their smartphones,” says “Diane,” a Santa Rosa Junior College professor. “As an instructor, you have to constantly be monitoring it.”

“Jenna,” a San Francisco State University senior, recalls getting her first smartphone and how it got her through a challenging class. “My best friend had taken chemistry the semester before me, passed the class with an A and saved all of his tests and worksheets,” Jenna says. “I would take pictures with my phone of the tests and diagrams, then I would just slide my finger over the photos and draw them exactly how they were. Needless to say, I aced all my tests, had no idea what the hell I was doing and never got caught.”

These applications are readily available and cheap. iCheat, a smartphone app offering a toolbox of cheating aids, is less than $4.

“We are much more reliant on uploaded lecture Powerpoints, multiple quiz attempts online and online group tests than ever before,” says “Justin,” a San Francisco State University senior. “While cheating a decade ago meant copying answers off of your neighbor’s paper,” Justin says, “I think it has recently evolved into something much more complex and planned out.” Justin has seen forum sites for sharing test answers, and sites that sell research papers or the answers to multiple-choice tests.

But while technology assists cheating, it also helps fight it. “Technology can actually help you catch people who are cheating. I know a lot of professors use turnitin.com, which pre-scans for plagiarism,” Diane says. Turnitin.com, along with similar websites, compares a student’s written work with a database of over 20 billion pages found online, resulting in an easy detection for rampant cut-and-pasting plagiarism.

“I find that neither student nor teacher is doing their job when everything is online,” says “Jake,” a Sonoma State University junior. “Online, you are a name on a paper, and when you are in class they don’t have any association with who you are. The whole system seems to be facilitating cheating.” The relationships that are formed within a classroom often provoke critical thinking and deter cheating; online, this is lost.

“It’s different if you are in a class with 250 students and the teacher doesn’t even know your name. I think having a rapport keeps students from cheating,” Diane says. “I try to establish a rapport with each student. I think that goes a long way.”

Technology aside, students deem the pressures of an increasingly competitive world to be, in part, the reason for dishonest academics. “Considering the amount of academic success and work experience expected from students post-graduation, there is an immense amount of pressure for our generation to succeed in multiple environments,” Justin says.

Justin is an accomplished student completing both a major and a minor—maintaining a 4.0 GPA, working two part-time jobs during the semester and getting up before dawn three times a week for an unpaid internship. “I think my opinion of cheating has completely changed since entering college,” Justin says. “While I was completely against it in high school, I have come to realize its unfortunate place in academia.”

Why do students cheat? “Paul” is a better-than-average senior at San Francisco State University with a 3.8 GPA and, in his view, the Western grading system is justification for cheating. “There is a problem with our system,” Paul says. “We are ranked by our GPA, which is not an accurate assessment of our knowledge. Just because one student has a GPA of 2.0 does not mean that they are less driven, hard-working or intelligent than a student with a 4.0.”

This way of thinking is shared by many and leads to a “cheat where it doesn’t count” way of thinking. “There is definitely a hierarchy of cheating; it’s not a zero tolerance game,” Austin says. “I had no problem cheating on my traffic school quizzes because it was basic information that lacked relevance.” This type of cheating is more about maneuvering red tape and less about educating oneself.

Some even rank certain types of cheating differently. “I would never plagiarize. That is where I draw the line,” Jenna says. “Plagiarism is stupid. It’s the easiest and sloppiest way to get caught.” And while getting caught is definitely a factor, there are long-term effects, too. “If you get caught plagiarizing as a professional in the field, not only do you lose your job but you pretty much end your career,” Diane says.

For a generation facing high levels of unemployment and college debt, the educational climate is tougher than ever. “The economy is making it very hard for students to find jobs and internships. Sometimes cheating seems like the only way,” Sarah says. “However, I find in most cases the best advice is to do the work and have confidence in yourself.”

“For me, cheating isn’t a way to succeed,” Jake says, “but it is a way to get me through certain situations. I think your time at school and what you do after are separate.” Students who cheat not only cut the workload in hopes of self-preservation, but they may actually be the more “conscientious” students, according to Diane. “Those who don’t care as much about their grades don’t seem to bother about cheating,” Diane says. This may suggest that cheaters, in some ways, are making the smart decision for their future.

“You are only cheating yourself” is the theme of a lecture given to all students. But cheating is justified by promising to do better, to try harder and to be more honest in your next endeavor. Maybe middle school and high school didn’t matter, so you cheated. And maybe freshman year was irrelevant to your major, so you cheated. And maybe you want to go to grad school—where things will really count— so you cheat until you get there. At what point will our best be good enough and honesty count?

As much as the temptation to cheat may be human nature, so is the moral question of integrity. Today’s students seem to differentiate between the decisions they make in school and the decisions they believe they will make once in the “real world.” Maybe we’ll live up to being the lazy generation our parents and grandparents have feared us to be, and maybe we won’t.

But to not have faith in ourselves? That cheats us in an entirely different way.