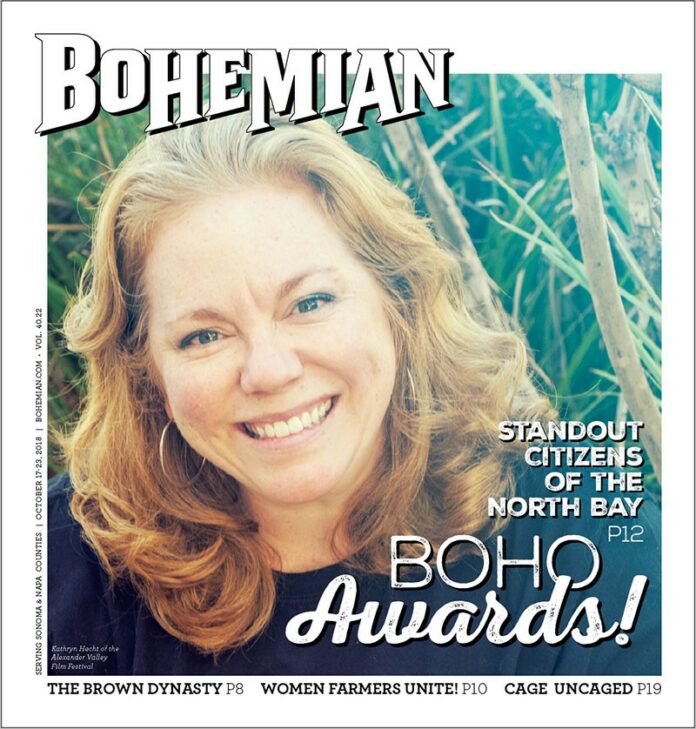 “I’m so pleased with the way this year is coming together,” says Kathryn Hecht, founder and executive director of the Alexander Valley Film Society. “This is a moment where we really get to shine and celebrate our community.”

Since moving to Cloverdale from New York in 2013 and launching the AV Film Society, Hecht has tirelessly worked to offer year-round educational and community film programming, which now reaches more than 4,000 people annually. She also founded and serves as the executive producer of the Alexander Valley Film Festival, which returns for its fourth year Oct. 18–21 with screenings and special events throughout northern Sonoma County. (For details and tickets, visit avfilmsociety.org.)

With a focus on showcasing film’s power to inspire and expand our collective humanity, the AV Film Festival has taken on the timely and resonating theme of “Heroes” this year.

“The theme is not something we apply to the structure of the event and then match our films to that; it’s something that emerges, and it’s always organic,” Hecht says. “So in this confluence of things, from where we were last year to the journey of this year, both as an organization and for our community, the [theme] that arose over and over in the films and documentaries was about people facing adversity and challenge—and their triumph.”

One such film featured at this year’s festival is the award-winning documentary On Her Shoulders, which tells the story of 23-year-old Nadia Murad, a sexual-slavery survivor and activist who recently won the Nobel Peace Prize for her work in bringing atrocities, like her experience, to light in front of world leaders and the United Nations.

“What makes the film so exquisite is that it’s not about her being a victim,” Hecht says. “It’s about the power of her voice and the resilience of her person.” Directed by Alexandria Bombach, On Her Shoulders is one of many women-directed films that populate this year’s festival.

“We have this incredible national conversation happening, finally, about women,” Hecht says. “And we’re not going to hear from women unless we give them more opportunities to tell their stories.”

In general, access to stories and storytelling is the key to the festival’s mission. “That’s an important theme for us,” Hecht says, “to bring stories here that people wouldn’t get to see otherwise, to have something kids and adults can go to and see themselves on the big screen and feel a little bit less alone.”

Aside from the annual festival, the AV Film Society celebrates the community all year by leading student filmmaking sessions, hosting drive-in screenings and other outdoor community gatherings and featuring socially conscious and culturally enriching programs throughout the region.

The society’s annual student filmmaking competition this year partnered with Healthcare Foundation Northern Sonoma County and the Sonoma County Office of Education (SCOE) to help the students reflect on the traumatic experiences of last fall’s wildfires and to move forward with three-minute micro-documentaries that focused on mental health.

Those films can be seen at the festival’s student film competition screening, and Hecht says the project is now being considered for classrooms across the county by SCOE and teachers who want to introduce media skills into their curriculum.

In addition to the student competition, the AV film society’s annual summer filmmaking workshops once again gave students the tools to write, shoot and edit short films in teams, and the society also offers several internships for local students, giving kids a chance to put a professional experience on their résumés.

Hecht and the AV film society are also in the process of expanding its Spanish-language programming, “Continuing this tenet of programming by the community and for the community,” says Hecht, “keeps the work reflective of where we live.”

In the late afternoon of Oct. 9, 2017, Amy Appleton got a call from Una Glass, at that time the mayor of Sebastopol.

“She told me that several people in Sebastopol wanted to open their homes to victims of the fires, and to those who’d been evacuated and had no place to stay,” recalls Appleton.

She was pinpointed by Glass because of her work as founder and executive director of SHARE Sonoma County, a program designed to facilitate home-shares for folks over 60, to allow aging adults to unite resources by sharing a home with an extra room.

The program, originally formed in 2014 under the umbrella of the Petaluma People Services Center, has helped hundreds of low-income seniors remain independent by helping them share housing, thus attaining a degree of security by reducing their financial burden, while gaining companionship, daily assistance, and other mutual benefits.

Since forming the program, Appleton has watched it expand to 13 cities in Sonoma County, and she’s used its success to create an even more ambitious, statewide version of the program, SHARE California.

Until the fires that struck Santa Rosa last October, however, the program hewed close to its original intention of serving the elderly throughout Sonoma County. But when Glass called and suggested that Appleton use her expertise at matching homeowners and renters with those in need of housing, she immediately called on Elece Hempel at the People Services Center to recruit a team of volunteers to help find temporary homes for the displaced.

“I got the call in the afternoon, and by 6pm that evening, we’d created SHARE Fire,” says Appleton. She makes it sound as if inventing a whole new public-assistance program overnight was just another day at work. Word traveled quickly, and within a few days, computers had been donated to assist in creating a database of those in need and those with rooms to share.

“Over the next several weeks, at any given time we had 40 volunteers working in the offices at PPSC,” she says. Estimating that she worked 14-hour days from Oct. 9 to late December, Appleton says she received hundreds of offers of rooms within the first 48 hours or so, and ended up facilitating 108 shares, seven of which are still intact.

“We had a myriad of different household configurations,” she says, “from single people who’d lost their homes or been evacuated, to whole extended families with menageries of animals. People were very generous, and though most of the people we helped did end up going back to their homes, a few days or a few weeks later, many of them had lost everything. So, yes, some of them ended up finding a permanent housing situation with people we’d matched them with.”

One year later, Appleton says she’s still helping survivors of the fire find homes. “A lot of people have been living in their RVs all this time, or in FEMA trailers at the fairgrounds,” she says. “It may have been a year, but there’s still a lot of work to be done, because there are still people in need.”—

Rob Keller isn’t afraid of honeybees and honeybees aren’t afraid of him. Keller isn’t the first to tend hives and harvest honey in the land where grapes and wine are treated like royalty, and he won’t be the last, either. But he’s now Napa’s go-to-guy when it comes to all things bee-related.

If that seems hard to believe, check out Keller’s license plate, which reads, “Bee Co,” and then follow him to the 40 different apiaries that he manages. What’s more, Keller is on the front lines in the environmental battle to save honeybee colonies from collapse, a problem all over Napa, which is friendly to tourists and inhospitable to honeybees.

“A vineyard is a desert for a honeybee,” Keller says. “You will not find bees on grapes.” When he talks to vineyard managers he tells them, “Give us some land back. Every inch doesn’t have to be in production.” In fact, honeybees can be potent pollinators and a farmer’s best friend.

Born in Pennsylvania in 1964, Keller graduated from Novato High School and studied art at UC Davis, though he says he always felt a connection to nature and to bees. At college, he created a sculpture and installed it in a beehive. That proved to be the start of his long love affair with the genus Apis.

A veteran apiarist once told Keller, “Never trust a beekeeper who is afraid of a bee sting.” Over the years, he has managed bees for Napa restaurants such as the French Laundry in Yountville and Farmstead in St. Helena. He also has a small farm of his own and an apiary, too.

When he’s not taking care of Napa’s apiaries, he educates wanna-be beekeepers, old and young. “Some people are very hands-on,” he says. “I tell them that bees ought to thrive on their own and that no one owns them. They’re their own masters.” Much the same might be said of Rob Keller.—Jonah Raskin

Nothing stops cannabis cultivator Joey Ereñeta. An arrest in Texas for possession of a small amount of pot didn’t stop him. (He was driving a VW with California plates.) Nor did a raid in Mendocino when law enforcement agents pushed his face into the ground and confiscated his crop, though they didn’t take him to jail.

Last year’s fires destroyed most of his crop, but that didn’t stop him from germinating seeds and cultivating this year. Then came the October 2018 rains. Still, there he was, in Glen Ellen on an overcast morning, keeping an eye on the crop and on the men and women who were working at Terra Luna Farm, which he calls “my baby.”

The workers were getting $18 an hour plus benefits. Jorgio from Santa Rosa said he’d rather work in a cannabis field than in a vineyard. “Any day, hands down,” he added. Ereñeta would rather grow pot than do almost anything else, though he didn’t set out to be a cannabis farmer when he entered UC Berkeley, studied tropical economic systems and became a social-justice activist. For the past 24 years, he has cultivated weed indoors, outdoors and in greenhouses.

These days, he grows biodynamically and sells nearly everything to SPARC, which owns and operates dispensaries in San Francisco, Santa Rosa and Sebastopol. “There’s pressure now to get everything out of the ground and check for mold,” he said. “Vineyard people have similar problems.”

Ereñeta knows nearly all there is to know about cannabis botany. For 10 years, he was the lead horticultural instructor at Oaksterdam University where he shared his skills and his expertise with hundreds of suburbanites, urbanites and back-to-the-landers who wanted to grow their own, or go into the pot business.

“I’ve been impressed with the team of gardeners we’ve put together at Terra Luna this year,” Ereñeta says. “But I’m also a perfectionist. I can see the ways we can improve next year.”

No doubt about it, Joey Ereñeta will be growing and harvesting cannabis in 2019, come hell or high water.—Jonah Raskin