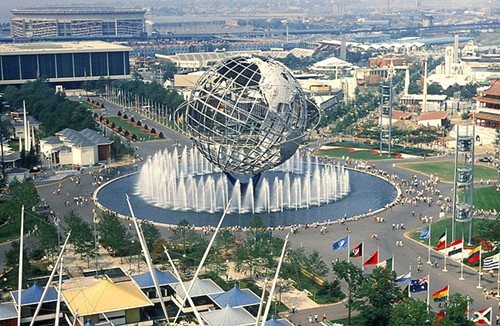 This is journalism porn, right here. The New York Times had really hit it out of the park with this digital layout of memories of the 1964 World’s Fair. It combines personal memories in short, meaningful, snippets with photos of the attractions. It’s tied together with enlarged, high resolution scans of the map, broken into sections, that appear and fold up into the top of the screen like a roll-up shade when the page is scrolled down. The names and ages of the writers are includes on their memories, giving the piece weight rather than reducing it to a trending Twitter feed.

A lot of work went into this, both in planning and execution. Major kudos to the team of Alicia DeSantis, Jon Huang, Matthew McCann, Jacky Myint, Dagny Salas, R. Smith, Daniel Victor and Amy Zerba. As with many digital efforts from the Times, it’s nearly flawless. In fact, I’m having a hard time finding something I don’t like about it. But despite its fascinating and thought provoking content and presentation, it brings a twinge of sadness.

This could never be executed today, and it pains me that I will never experience the wonder, hope and fascination the World’s Fair brought. People today wouldn’t be as impressed with the technology, no matter how advanced it was, because almost everyone carries a computer in their pocket. There would be more geopolitical implications and reactions to the highlighted countries (as in, why isn’t country X represented? Or, why is country Z given so much prestige?). It would never get built on such a grand scale because of the payola to government officials and insurance requirements. And for some reason, religious groups would protest. I don’t know why, but they’d find a way. The lines would be hours long for everything, and considering a single ticket to Disneyland is now $92, admission would certainly cost too much for lower and middle class families to attend. It would simply become a playground for the rich, and cater to that audience. There wouldn’t be any surprising future ideas on display because it’s all patented and nobody would want their potential gold mines being stolen.

But enough with the Debbie Downer nonsense, here’s a video of Disneyland’s Splash Mountain ride, complete with characters from the incredibly racist yet heartwarming creepy Disney film, Song of the South.