.Two Guys and Their Pizza

Oenotri and the quest for authenticity 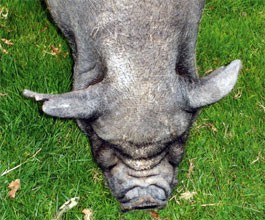 PIGGY ART SHOT: Sometimes, obtaining a photo is harder than you think. Yes, even when you have a week. Particularly if you don’t try very hard. Enjoy the pig; the lads do.

Plenty of guys in their 20s have a jones for pizza, but few are crazy enough to follow their pie passion to the extreme and open an Italian restaurant in Napa, the land of way too many Italian restaurants. But the wildly successful Oenotri, now in its third month, has taken foodies by surprise just as the proprietors, Curtis Di Fede and Tyler Rodde, have more or less jolted the culinary community here. For them, the quest for authenticity is, well, an extreme sport.

My first time at Oenotri, I sat at the counter to watch the line cooks. Di Fede was grinning in front of his chest-high wood-fire oven like a man in love, making his signature pizzas—very thin dough, amorphous white cheese with mussels and a shining ring of olive oil brushed upon the exposed edges.

As he slipped the creation into the oven, a customer asked idly, “How hot does it get in there?” Di Fede whipped out a gunlike gadget and pointed it at the fiery interior. “Eight hundred degrees,” he reported proudly, explaining that the beautiful clay oven came from Naples by boat. With installation, it cost over $20,000. I wondered at first whether this was taking the whole Italian thing to the extreme (don’t we make ovens in this country?) until I sat down to interview the two pizza fanatics and fell entirely under the spell of their enthusiasm.

“We’re obsessed about pizza,” Di Fede explains. “We love pizza.” But this almost sounds like a ruse when they’re doing so much more than that and working 90 hours and seven days a week to get it done. But neither chef looks tired as I stare across a restaurant table at them for a morning interview, noticing also why they’re often mistaken for brothers.

Similar in build with matching brown hair, the men are equally humorous and uncannily compatible, even finishing each other’s sentences. Like twins, they exuded matching amounts of joie de vivre when talking about food. “We love to learn things and to dig down deep,” says Rodde. Di Fede adds, “We like to do things from the ground up.” This includes the flooring and kitchen design they did to get the place opened. I look down at the pigmented concrete and ask, “So, you know about floors?” They grin, and Rodde answers for both of them: “We do now.”

Someone from the kitchen announces a delivery. A 220-pound pig has arrived and is ready for butchering. “We do all our own butchering, because you don’t know how the animal was treated unless you see the condition of the whole thing. Most restaurants order cuts of things, but we don’t. We get a whole pig every Wednesday,” Di Fede explains. “We butcher it ourselves and use every part of it. We make salumi, pâté and head cheese. The bones go to stock.”

Rodde, a culinary school drop-out, and Di Fede, graduate of a nine-month cooking program in London, met four years ago as line cooks in Oakland’s Oliveto where they got their real education, learning about the labor-intensive southern Italian cooking methods practiced at that iconic East Bay restaurant. They knew there was nothing similar being done in the Napa Valley, where both men have family ties. Over a cup of coffee, the friends plotted their restaurant and then spent three years making it happen, hands on.

“People didn’t think we were serious at first,” Di Fede says, adding, “because we like to have fun.” Fun appears to be the operative word here. And Di Fede and Rodde think it would be fun to earn the certificate of pizza-making authenticity backed by the Italian government, the Vera Pizza Napoletana. “You can only use four ingredients in the dough,” Di Fee says, his face alight with joy. Clearly their jones for authenticity is equal to their jones for making a good pizza. And while these two guys are having fun, Oenotri is getting excellent reviews. There hasn’t been a slow night yet.