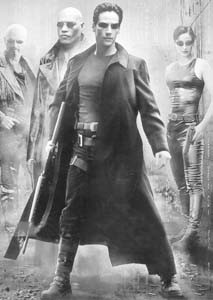 So just what can we do to stop the high school shootings?

THE MOST popular movie in America this week is The Matrix. Act 1: Keanu Reeves portrays a friendless young man trapped in a world populated mostly by mindless peers who cannot share his angst and by inhuman authorities deserving only contempt. He spends most of his time surfing the Internet and cultivating a feeling of detachment from reality.

Act 2: Larry Fishburne, who is even more detached and therefore cooler, informs Keanu that his perceptions are fully justified: In fact, he is the One who will eventually destroy the existing order. Keanu, gradually gaining power as he becomes ever more alienated, joins Larry in leading a gang of black-clad rebels in confrontations with and escapes from the bad guys. Betrayals and chases and plot twists ensue.

Act 3: Fulfilling his destiny, Keanu and an accomplice enter the bad guys’ building strapped to the nads with automatic weapons hidden under long black trench coats. Showing little emotion and no mercy, they blithely kill everyone in their path. Lots of people get shot in innovative ways, much of it in slow motion. Keanu, utterly empowered, eventually literally flies to the heavens. Roll credits.

Audiences across the country think this is all really, really cool. The film has been No. 1 in gross receipts for three of the four weeks since its release. Americans have spent almost $120 million to see this movie in a single month. Experts estimate we’ll spend at least $40 million more. Sequels already are planned.

Easily the most memorable line of dialogue in the ads that sold this movie: “We need guns. Lots of guns.”

So now let’s all act so terribly shocked about the kids in Colorado. Let’s all point fingers at each other and wonder how anyone could think of doing such a thing.

Liberals don’t normally like to admit that media images influence human behavior, partly because too often people use that excuse to try to censor stuff they personally dislike, which usually includes anything to the left of Debbie Boone eating American cheese and Spam on Wonder Bread.

But of course media images influence human behavior. If not, the entire concept of commercial media would be completely inoperative. The whole purpose of advertising is to influence your behavior through powerful images. And it works, obviously, or else the entire TV, movie, radio, newspaper, and magazine industries would cease to exist.

So what now? Contrary to standard conservative advice, prohibition of ideas or images simply isn’t an option. It doesn’t work any better than the prohibition of alcohol or drugs has ever worked, and there’s this pesky First Amendment thingy in the way.

Which means, ultimately, either the broadcasters and producers have to stop selling violent images voluntarily–a prospect about as likely as Dennis Rodman becoming a Franciscan monk–or you and I and the rest of us simply have to stop giving people who produce hyperviolent entertainment hundreds of millions of dollars.

WE ALL NEED to teach ourselves again that gratuitous images of human slaughter are the worst form of pornography. Only then can we begin an intelligent dialogue about healing the psychological wounds we’ve already inflicted on ourselves and our children.

But of course gun ownership can be and is widely regulated, with the Supreme Court’s full consent. Saturday night specials are against the law in many communities, as are sawed-off shotguns, fully automatic weapons, and lots of other stuff. If the NRA’s version of the Second Amendment was accurate, these laws wouldn’t have a chance of staying on the books. And as to the shooters, they wouldn’t have done nearly so much damage armed with slingshots and bowie knives.

S o what now? Contrary to standard liberal advice, more laws, by themselves, are not the answer. Many of the weapons in Littleton, Colo., were already illegal. It simply didn’t matter. Enforcement of existing laws, as NRA bigshot Wayne LaPierre has correctly pointed out, would be a start. And so for once the NRA should throw its full weight into lobbying for increased law enforcement resources in this regard.

Here’s Barbara Wheeler, former president of the National School Boards Association: “That’s one of the great mysteries: How do you identify a student who is going to act out?”

Other than dressing in black, forming a gang, prearranging fights with other students, speaking in German, giving Nazi salutes, and filming a fantasy video in which they kill their fellow students, she means.

Here’s Chicago Sun-Times editor Nigel Wade on why the Columbine story appeared on page 2 instead of the front page: “We’re putting the story where adults will find it … giving parents a chance to decide whether their children will see it. … [The story] could harm or frighten vulnerable children.”

As opposed to a page 1 story they did run, in which Serbian troops machine-gunned a column of Albanian refugees. Much healthier for the kids.

Here’s NRA president Charlton Heston, claiming that the solution is more guns, not fewer: “If there had been even one armed guard in the school, he could have saved a lot of lives and perhaps ended the whole thing instantly.”

Never mind that there was an armed sheriff’s deputy present who got off a handful of useless shots from his sidearm before being forced to flee for his life.

Here’s Colorado governor Bill Owens, blaming the parents merely because some weaponry flotsam was found in plain view in a gunman’s bedroom in the aftermath of the attack: “I think that perhaps charges will be filed and certainly should be filed. … [Police] found in one of the gunman’s homes clear evidence out, sitting in the room, of what was about to happen.”

Let’s get this straight: One of the gunmen fails to clean his bedroom before leaving for school on the day he’s planning to die, so the parents must have had advance knowledge.

And finally, here’s Bill Clinton on the Columbine school shootings: “We must do more to reach out to our children and teach them to resolve conflicts with words, not weapons. … Violence is wrong.”

And then he went back to bombing Yugoslavia.

The insanity in this country goes a lot further than two kids with too many guns.