.Smoke ‘Em While You Got ‘Em

If new legislation passes, those cloves and flavored cigarettes will be nothing but stanky butts in the tray 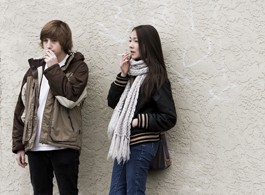 It’s Over, Clover: Clove cigarettes, often seen as a ‘gateway’ smoke to Marlboro Country, are on tap to be banned.

Clove-smoking hipsters may have to find another way to look sexily uninterested without the crutch of their Djarum Blacks. New tobacco legislation that gives the FDA the power to regulate the tobacco industry overwhelmingly passed on July 30 in the House of Representatives.

The Family Smoking Prevention and Tobacco Control Act allows for sweeping regulation of tobacco products: flavored and clove cigarettes would be banned; cigarette manufacturers could no longer label products as “lights” or “ultralights” and must disclose the amount of all additives; any new type of cigarette would have to be given premarket approval before being sold; and all tobacco advertisements on outdoor posters would have to be in black-and-white.

And lest anyone has any lingering confusion about the painful and premature death that befalls many smokers, current warning labels could be replaced with graphic images of tumors and mouth sores. Similar legislation has broad support in the Senate, though it’s unclear if it has enough to override a threatened veto from the White House.

Profundity aside, the government intervention is selective and inconsistent. Cherry vanilla cigarettes are out, but menthols are allowed. Natural clove additives are banned, but ammonia? That’s A-OK with Uncle Sam. In this, as in all things, politics has a role to play.

Curbing tobacco’s appeal to minors is paramount to the logic behind much of the legislation’s stipulations, especially the part that bans flavor additives in cigarettes. Proponents of the legislation reason that clove, spice and fruit-flavored smokes are “gateway cigarettes” that mask the harsh taste of tobacco, making for a deceptively delicious smoke that gets kids hooked.

“My hope is that it will be most effective with minors,” says Eshoo. “We know from all of the research that’s been done that once young people start smoking, it becomes a habit and then an addiction. My hope is that young people will not become addicted.”

But most young tobacco smokers don’t regularly smoke the sugary cigarettes. A 2005 Centers for Disease Control study of the smoking habits of high schoolers found that while 23 percent smoke regular cigarettes and 14 percent smoked cigars, only about 5 percent smoke flavored or clove cigarettes.

The minty cigarette is the sole flavor still allowed under the new legislation. After significant debate, especially within the Congressional Black Caucus, menthol cigarettes were exempted from the flavor ban. Multiple surveys report that about 70 percent of African-American smokers smoke menthols, compared to about 30 percent of white smokers.

Eshoo supports the banning of menthols as well and blames the minty-not-so-fresh exemption on tobacco-company-influenced politics. “I think by banning all flavors, if that helps keep people away from something that they really like, then so be it,” she says. “From the politics of it, the flavored cigarettes are more popular with adults than they are with minors. If something doesn’t taste good, and it keeps people away from it, then so be it.”

Perhaps surprisingly, Philip Morris USA, the largest manufacturer of cigarettes, has put its support behind the legislation.

The majority of clove cigarettes, also called kreteks, are manufactured by Djarum, an Indonesian company. However, even regular cigarettes often have some type of flavor additive, so other tobacco companies may have to change the specific formulas for different cigarette varieties.

But while banana flavor may be banned, common cigarette additives like polyethylene, acetic acid and polyvinyl acetate—and, yes, ammonia—would still be allowed. These additives and their respective amounts would be required to be disclosed on cigarette boxes.

Tobacco companies seem to have anticipated stricter regulation of their products and have adopted different packaging accordingly. Instead of only labeling cigarette varieties as “lights” or “ultralights,” a distinction not allowed under the new act, tobacco manufacturers have been color-coding varieties and labeling them with blend names: Marlboro Blend No. 27, Camel Turkish Blend, etc.

Tobacco studies have not shown that light cigarettes are any less harmful than regular cigarettes, and potential consumer misperception that lights are safer led to the banning of the light and ultralight distinctions.

Other tobacco companies oppose the legislation and find the distinction between regular, light and ultralight blends necessary. A statement issued by RJ Reynolds, which opposes the new tobacco bill, calls for “informed choice by adult consumers” that allows smokers to “switch to a lower risk product.” Presumably, that’s a reference to light cigarettes, or possibly smokeless tobacco, but the company does not specify.

Venturi believes that the government could try to ban cigarettes outright within the next 20 years. He compares cigarettes to other potentially harmful but legal choices—”alcohol, barbecues, joining the military”—all choices that he thinks informed adults have the right to make for themselves. “Where does it end with government controls?” he asks.

Next ArticleThe End of the Summer