The good, the bad and the ugly of winery design 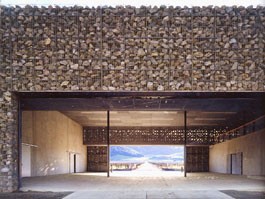 During the mid-’90s, wine legend Christian Moueix commissioned the Swiss architecture team of Jacques Herzog and Pierre de Meuron to design a new building for his Yountville winery. The extreme exclusivity of the resulting Dominus winery comes across in its architecture: a perfect rectangular fortress erected from basalt rocks that are held up by a wire cage. Herzog and de Meuron would go on to design the Tate Modern’s reconstruction and to win the Pritzker Prize, the highest award for architecture. Surprisingly, Christian’s wife, Cherise, has said that the $5.4 million budget for Dominus was relatively modest, hinting at the opulent direction winery architecture is taking.

Adventurous Wine Architecture (Images Publishing Group; $60), written by Michael Webb and photographed by Erhard Pfeiffer, is a new coffee table book and subject of a recent exhibit at COPIA about innovative wineries built within the last five years. It depicts a world where winery owners vie to outdo each other, hiring the most prestigious architects available to come up with the most monumental shrines to Bacchus. But you won’t find any classical structures between these pages. Gone are the straight replicas of French chateaux or Italian villas (although detectable hints of their structural elements remain). These wine cathedrals are about cutting-edge, postmodern design–think Paris’ Pompidou Center.

The book discusses 54 fantastically weird wineries, from one in Chile that resembles the inside of a wine barrel, to another in Argentina that brings to mind Kubrick’s ominous Eyes Wide Shut set. Nine of the featured wineries belong to the North Bay: Dominus, Stags’ Leap, Quintessa, Opus One, Long Meadow Ranch, Artesa, Hess Collection, Chappellet and Roshambo.

Richard Fernau designed the Napa Valley Museum with his firm Fernau & Hartman Architects Inc. Speaking by phone from his office at UC Berkeley, where he is a professor of architecture, he explains that when it comes to wine, the “building is part of the identity of the product.” In other words, many people equate a good building with good wine. And it’s not that constructing high-quality wineries is a novelty. Having just returned from the ancient heart of Portugal’s own wine country, the Douro Valley, Fernau says, “The tradition of tasting wine in a cultured environment is an old one; wine culture [is about] quality and graciousness, and that’s expressed in the architecture.”

But what is new, according to Fernau, is how the trend toward building high-quality wineries is picking up its pace and changing the face of Napa Valley. (Michael Webb attributes the beginning of this trend to Robert and Margrit Mondavi, dedicating his book to them “for advancing the culture of winemaking and architecture.”) Fernau says, “One of my critiques about the Napa Valley in general is that the style is one that’s south of anywhere, e.g., south of France or south of Italy. It’s about facade–not about California or its experience. Our wines rival those of France and Italy, but the fact that we have to copy their architecture is an embarrassment.”

Fernau reserves his praise for Moueix’s vision. “Dominus has reinvented the way to be substantial and cultured and make a statement about art, without simply putting up a facade that reminds you or is symbolic of some other place and some other time.”

While Fernau sees investing in innovative winery architecture as a good thing, he warns of one of the pitfalls. When winery owners insist on importing star architects from around the globe, he says, they neglect to consider the local pool of architects. Such architects, presumably more familiar with the land, might offer ideas specifically tailored to the site, and therefore be truly innovative rather than relying on “signature work” and simply repeating ideas for which they’re reputed.

OK, point taken. But let’s just say that if Antonio GaudÌ, the renowned Barcelona architect who devoted the last years of his life to the still-unfinished Sagrada Familia Basilica, were still alive, he’d have long given up on housing religion.

He’d be designing a winery, and I’d drink to that.