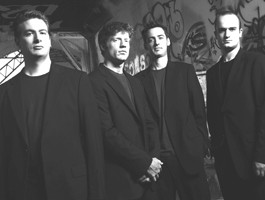 It gets said all the time, “Classical music doesn’t have to be boring!” But there’s a slew of performances coming up that truly mean it, and what’s more, they’re either free or cost hardly anything. It cannot be stressed enough: If you or a friend have been meaning to check out an exciting classical performance but haven’t wanted to risk your money on a dull night, then the next couple weeks are a blessing.

This Saturday, the daring and angular Calder Quartet (above) open the Russian River Chamber Music’s season, blending the traditional and avant-garde with works by Terry Riley, Philip Glass and Franz Schubert. Appropriately named after the great visual artist Alexander Calder, the young ensemble brim with a rock ‘n’ roll energy, infusing fresh blood into challenging forms. A special afternoon “informance” for teens offers the experience of sitting in at band practice, hanging out with the dudes and dissing the Barbie-doll crossover quartet Bond (they suck) at the Palette Art Cafe (235 Healdsburg Ave., Healdsburg) at 2pm; at 7:30pm at the Healdsburg Community Church (1100 University Ave., Healdsburg), the doors are open to all. Preconcert talk at 7pm; post show reception follows. 707.524.8700. www.russianrivermusic.org.

On a final note, the Santa Rosa Symphony have something literally “out there” planned in conjunction with their performance of Holst’s The Planets next weekend: a giant, live-sequenced video projection of crazy space images from NASA on a huge screen behind the orchestra. In the lobby, audience members will be able to virtually explore the solar system on 3D computer stations. Also on the bill is Messiaen’s tribute to Mozart, Un Sourire, and a Mahler song cycle sung by Jacalyn Kreitzer. Here’s an inside tip: tickets for Saturday’s rehearsal—just as cool, and way more casual than the “real” performances—are just 10 bucks. Don’t miss it, Oct. 13&–15 at the Wells Fargo Center for the Arts, 50 Mark West Springs Road, Santa Rosa. $10&–$50. 707.546.8742. www.santarosasymphony.com.