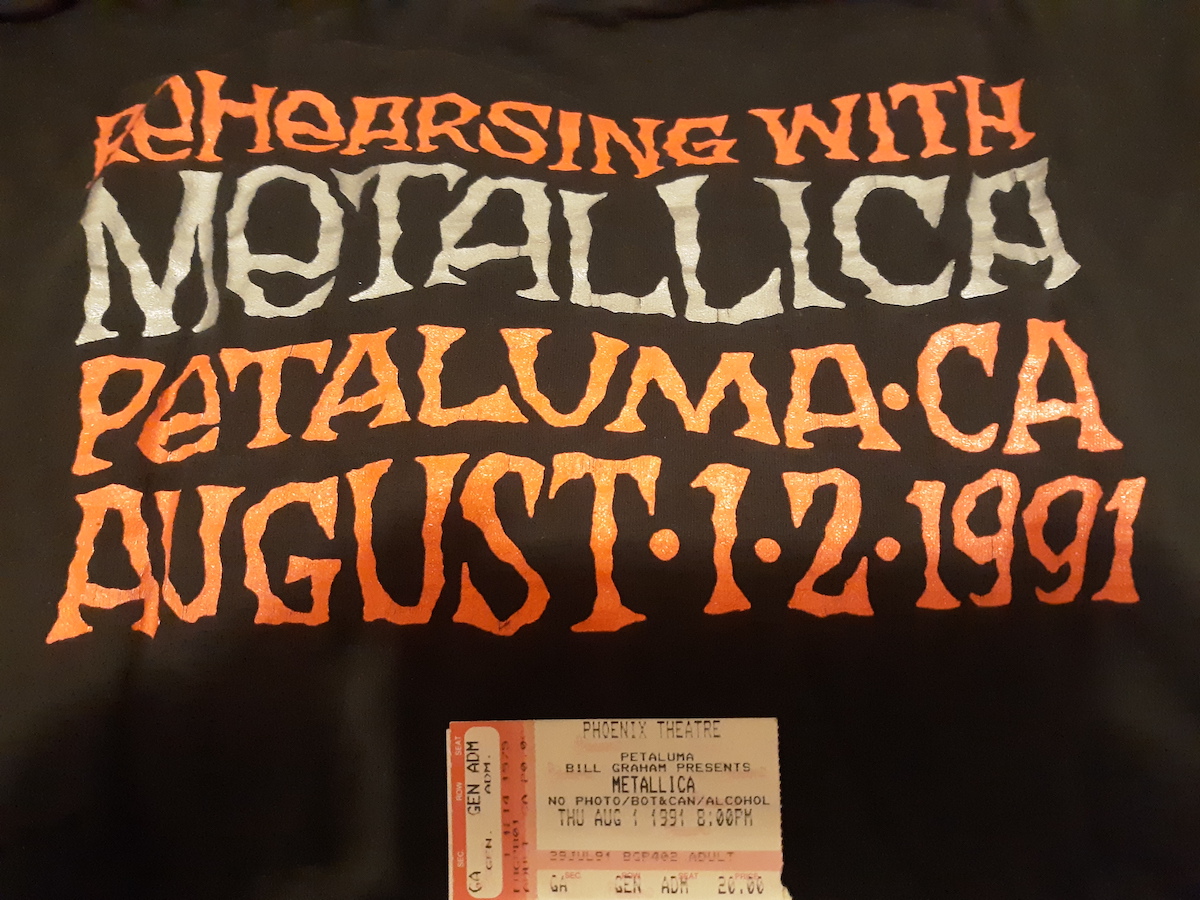 Metallica’s “San Francisco Takeover” happens this weekend. Their 40th-anniversary celebration is well deserved, as the guys have weathered storm after storm and remain standing at the top of the metal food chain.

Another anniversary passed quietly this past August, but a few North Bay metalheads have not forgotten the two nights ’Tallica completely demolished the Phoenix Theatre. The Black Album had yet to be released, but the rehearsals were announced on the radio for August 1st and 2nd 1991. Tickets sold out before they could even be printed up. Well, not really, but they disappeared instantly. You actually had to go to a BASS outlet to buy tickets in those days, and they were printed on cuneiform clay tablets—as in ancient Sumeria.

As one of the unlucky ticketless—sad but true—I decided on the tried-and-true; show up anyway. As a veteran live-music fan I knew that grit, determination and a catchy sign were required. I drew a nicely bloodied hammer and “Need ONE!” on a piece of cardboard and stood across the street outside Volpi’s Restaurant, waving the forks as cars drove by.

Sure enough, just before showtime, one of Metallica’s road dogs walked over and sold me a ticket for 20 bucks. Score!

The late-summer evening was very hot and dry, and inside was practically an oven. The Phoenix balcony was still open, and I found a rickety seat—aren’t they all?—and waited. “Ecstasy of Gold” poured from the speakers, surely the greatest intro music ever chosen.  Then as now, every Metallica show opens with the Ennio Morricone classic from The Good, The Bad, and The Ugly.

The band came out on time, and the place went berserk. Like all the shows on that tour, “Enter Sandman” was the opening tune, and its first live performance was that night in Petaluma.   Pre-internet, no one had heard it, and the build-up was tense and ferocious. When they finally broke into the main part of the tune, the entire crowd was theirs.

After an hour and a half of creeping death, battery, sonic destruction and three encores, the building was severely damaged, and a seismic retrofit was desperately needed. Youtube has it up for the completist fan.

Thankfully, the band had special T-shirts printed up with “Rehearsing with Metallica in Petaluma” written on the back.  Eight weeks later they played Tushino airfield near Moscow for a crowd so immense no one is quite sure how many were there.  Jason Newsted wore the Petaluma shirt which can be seen in the infamous video. The crowd response makes a Nuremberg Rally look benign. The Soviet Union collapsed shortly afterwards.

Despite the band’s massive following, the Petaluma show would not be the last time they played small halls.  A recent SF Independent club show and extended fans-only runs at the Fillmore several years back prove the band never forgot where they came up from.

So, while I can’t say I saw them at Metal Mondays at the Old Waldorf in ’82, I can say I remember the night they destroyed the Phoenix. And I have the hearing loss to prove it. So what? Now, get off my lawn.