By Nicolas Grizzle
Jan 18, 2014
Share
Facebook
Twitter
Linkedin
WhatsApp
Email
Print
The cyclical nature of revolution songs is undeniable. Take a song from 100 years ago and it will be, at least in part, relevant today. Take, for example, the songs of Irish revolutionary James Connolly.
Mat Callahan, who fronted the San Francisco political punk/worldbeat band the Looters in the 80s, has compiled a book of Connolly’s music from original publications long thought lost to history. The book is put together well, with just enough history to give a sense of Connolly’s importance but relying mostly on the man’s own words from his music, all of which was written over 100 years ago. Connolly, a leading Marxist theorist in his day and was executed by the British in 1916.
Callahan and his wife Yvonne Moore, who now call Switzerland home, performed about a dozen songs on acoustic guitar and vocals at the Arlene Francis Center Friday night. The performance was the most punk rock thing I’ve seen all year, and will hold that title for at least a while. The duo sent a frozen shiver down my spine with lines like, “The people’s flag is deepest red, it shrouded oft our martyred dead; and ere their limbs grew stiff and cold, their hearts’ blood dyed its every fold.”
Santa Rosan Robert Ethington opened the show with original songs on acoustic guitar, accompanied by his wife Amy on vocals. They played a handful of powerful songs, suggesting they’d be a treat to see as a headlining act. 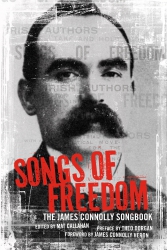 The album, “Songs of Freedom,” includes fully orchestrated versions of the songs Callahan and Moore played Friday night. It’s got Callahan’s worldbeat sensibility and arrangement, with guitar, bass, drums, Irish whistles, pipes, vocal harmony, fiddle, accordion and harp. The production is excellent, and the arrangements are updated to modern sensibility without losing their original feeling. Some tunes to Connolly’s songs were lost, so Callahan wrote original music to his lyrics. It serves to note that Connolly’s main purpose of putting these revolutionary words to music was for people to sing them and remember them, so many of the tunes are actually traditional country songs or somewhat hokey, simple melodies. They sound best when sung with 100 of your closest, most fed-up-with-the-system friends.
Get the book and CD here. It’s perfect for fans of history, revolution and Mat Callahan, each of which is equally important.
Here’s where you can catch this great show: 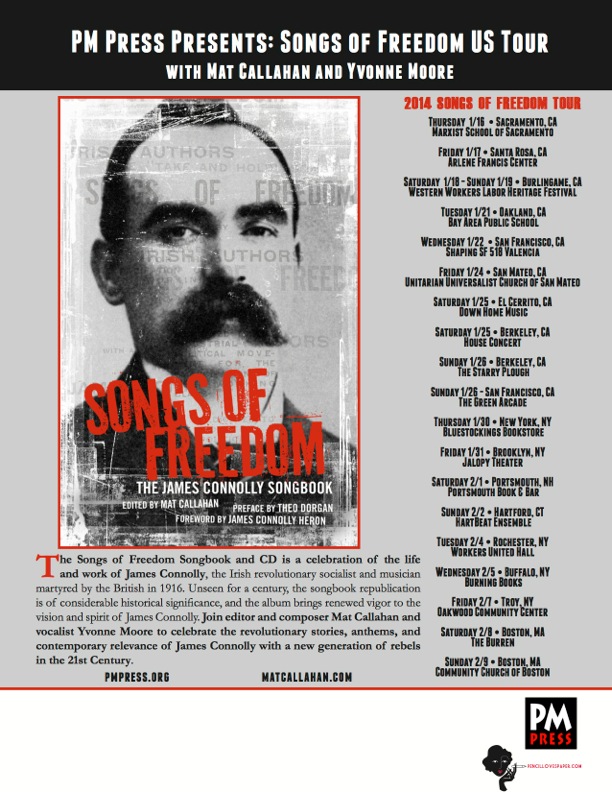