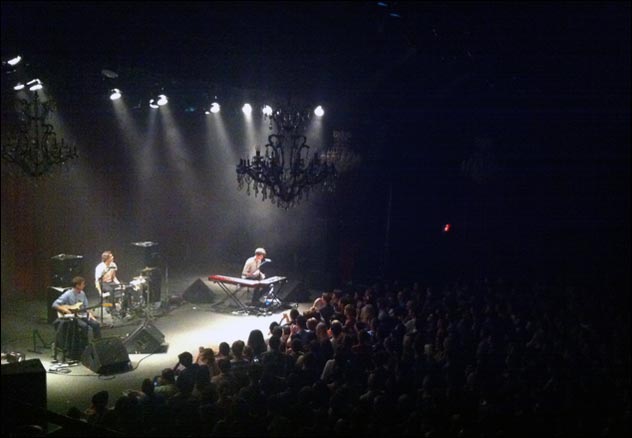 For those who’ve bought James Blake’s much-lauded debut album and have remained underwhelmed, my advice is this: see him live. A fundamental quantity of his music’s dynamic range and impact is diminished by the recorded medium—especially if listened on ear buds or a computer’s built-in speakers, but even when played on vinyl through a high-quality system. Perhaps this is intentional. Maybe Blake presciently knew that most people listening to his album would do so alone, and strategically mixed it to be hushed and intimate.
What seems thin and minimalist on his album, though, became ferocious and dense in a live setting when James Blake appeared at the Fillmore. This was no more evident than in “Limit to Your Love,” a small-sounding song on record. But at the Fillmore, the song’s sub-bass registers literally rattled the windows of the venue, and rumbled the insides of the sold-out crowd. The effect was astonishing, and added a completely new dimension to the otherwise plain, pretty song. On record, there’s simply a limit to one’s love; but live, Blake’s performance seems to note that when that limit is reached, things churn and rumble and quake. Heavily.
With just a three-piece, including a drum set comprised of mostly electronic triggers, Blake and his band conjured wild tension out of thin air, all while Blake’s voice floated angelically above the turmoil. This is a page out of the Radiohead textbook, but Blake’s execution is more emotionally direct, and less cerebral. His slender, foppish build adds to his appeal; songs like “The Wilhelm Scream,” which was breathtaking at the Fillmore, seal it for good. It’s tempting to relate his mainstream appeal in systhesized music to that of Howard Jones’, honestly.
But the new songs Blake played live at the Fillmore—thick, urgent collages of cacophony—brushed aside any flavor-of-the-month thoughts. If he continues pushing the envelope (and the VCA, and the LFO), and if he somehow manages to get the impact of his live show on record, he’ll be leaving the hype in the dust.

Next ArticleWhen Millionaires Throw a Party