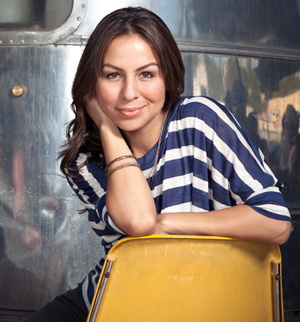 She started as a wave, rolling in from far out in the ocean. She built up steam and, halfway through the show, her jokes began to land with explosions of laughter. Anjelah Johnson is more than a one-joke pony–this California comedian’s built to last. 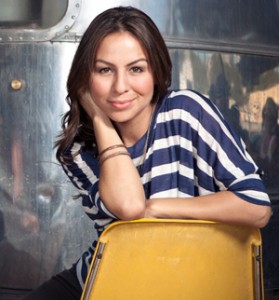 Slipping seamlessly between “normal” and her lovable ghetto gurrrl voiced-characters, Johnson was a quick study for the audience at Napa’s Uptown Theater last night. Some hilarious jokes were performed so quick and nonchalantly that the audience, largely unfamiliar with much of the culture she was referencing, probably would have laughed even harder had they grown up in a more diverse area. Her opening joke nailed this sentiment. “I’ve never been to Napa before,” says the Mexican comedian who grew up in San Jose before moving to Los Angeles. “I thought it would be more…” and she made a snooty duck face. You know, the ones on every teenager’s Facebook page, but influenced by a glass of wine and a sense of entitlement. Before anyone starts up the hate train, I stress that she said it wasn’t like that. Unbundle your undies, already.
I’m going to sandwich a bit about Kabir Singh’s set in the middle because I don’t want anyone to miss it. This Indian comedian opened the night with hillarious riffs on Indian culture, among other topics. He’s very loud and energetic and it’s tough not to like him. Besides that, his jokes are great. One of my favorites was Indians bargaining: “Even an Indian getting mugged would bargain. ‘I’m gonna shoot you!’ ‘Ok, buddy, how about you just stab me and we call it a day, huh?'”
Johnson recently married a Christian rapper, who was on hand to pose for pictures with everyone leaving the theater. If you search Instagram, just type “Anjelah Johnson’s hudband”–this will yield more results than his name, surely, which I still don’t know. Even though she once had a whole joke about the oxymoronic music genre that is Christian rap, Johnson (and her huge, sparkly diamond ring) seems quite happy with the turn of events. Her jokes about moving in and starting a life together were not as brutal as they could have been. Maybe her biggest peeve was her husband’s use, once, of her toothbrush. “I never even thought of that as an option,” she says.
Johnson mostly went with new material, but a few Raiderettes in the crowd, waving pom poms after the best jokes, caught her attention. She busted out some moves (she was a Raiders cheerleader in 2003 when the team went to the Super Bowl), and even made a Raiders joke (the punchline was, essentially, the Raiders). The Raiders fan in the front row could not argue, and even took off his hat in a moment of shame.
She saved her “hits” for the end, busting out the characters of Bon Qui Qui and the Nail Salon Lady while showing T-Shirts and even a 3-song rap CD featuring the characters. She rapped along with some of it over the sound system and said the idea was picked up by Atlantic Records and to expect a full-length effort soon. With all her skills (she’s a talented dancer, singer and rapper in addition to being ridiculously funny), it’s a wonder she hasn’t landed more movie roles or her own TV show (though she does a significant amount of voice acting). If this album news is true, it could be the crossover hit that cements her career. Hey, good music is good, and good music that’s funny is often even more entertaining.