.Review and Photos: Alison Krauss and Union Station at the Green Music Center 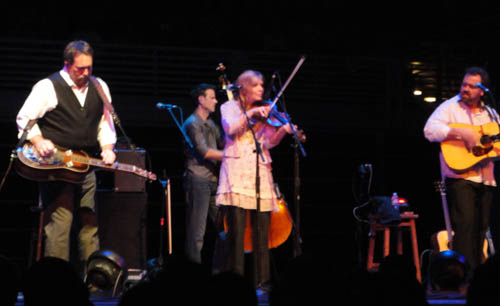 I used to sell meat. My favorite part of the day was sampling out bacon. Our bacon was real, thick-cut, how-it-should-be bacon, which many members of the public had never experienced. Their reaction always began at the eyes, then traveled up to the brow before sinking into the rest of the face and, sometimes, weakening the knees. It was something they were familiar with, but just didn’t know what it was really like, or how good it could be.
After seeing Alison Krauss with Union Station, featuring Jerry Douglas, last night at the Green Music Center, I now know that feeling from the other side of the counter.
It was maybe halfway through the concert that everything came together in a rush of emotion, and Krauss’ emotional songs might have played a factor, but I was holding back tears when the realization hit me. Nothing will ever sound better than inside this hall. This is quite possibly the best-sounding band, the most professional engineers, in the most gorgeous acoustic space I will ever experience. This is the French Laundry of concert spaces. 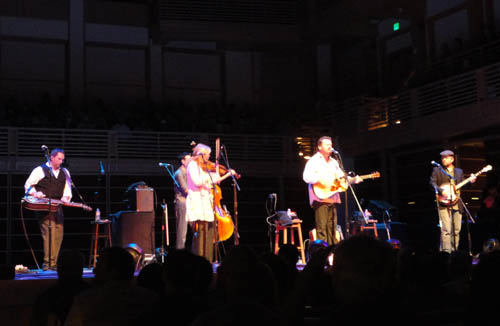 This was the first non-classical concert in Weill Hall, the five-carat diamond amongst the surrounding gems of the Green Music Center at Sonoma State University. In addition to Krauss and Union Station wrapping up the festivities, this opening weekend included a gala opening concert with pianist Lang Lang, a sunrise choral concert with original music composed for and dedicated to those involved with the creation of the center, and an afternoon performance by the Santa Rosa Symphony, which has the privilege of calling the hall its home.
In comparison to the previous evening, which was full of tuxedos, Versace gowns, politicians and formal stuffiness, this was a decidedly blue-jeans event. There were even people dancing on the lawn, the mood was so jovial. The weather was perfect, absolutely perfect, and I can’t help but see exactly what drove SSU President Ruben Armiñana to create this indoor-outdoor concert space. In fact, though my seat was inside the hall, I strode outside in the second half to see what it was like, and honestly I preferred sitting on the lawn. Of course, weather permitting and musical style taken into account, it wasn’t inconceivable that the best seats in the house were, in fact, not in the house at all. 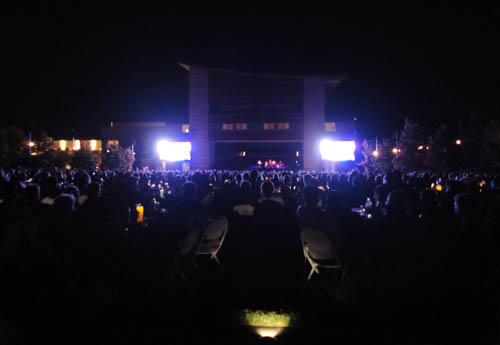 The two large LED screens flanking the opening to the concert hall were a little too bright, but what they showed was beautiful. Close-ups of the band, their expressive faces, their lightning-fast picking all dissolved with slow fades. Combined with the excellent, natural sound coming from both the hall itself and reinforced with high-hanging speakers and downfiring subwoofers (18 of them), this was the best outdoor sound I have ever heard. I had a tough time hearing some of the stories and witty banter between songs, but I suspect that had more to do with the storytellers turning away from the microphone for a moment. Can’t amplify sound that’s not there!
The band played together for about an hour before Jerry Douglas gave a solo performance on Dobro guitar, which blew me away from my 10th-row seat. Even with a stack of speakers in front of me, the sound was natural, even, pleasing and rich. Not once did this sound engineer turn to look back in the direction of the mixing board to suggest something unpleasant was happening. In fact, I would like to give a written high-five to the engineer for the evening. You did the hall justice. You got on that balance between acoustic and amplified and walked the tightrope all night long. And when the band came back for an encore set, using only one microphone, they were right there, too, blending themselves using distance and dynamics between voices and instruments.
Douglas announced this was the last stop of their two-year (!) tour. They were so musically tight and having so much fun, it seemed like they felt at home. At one point, Krauss turned to the balcony crowd behind her and waved, turning back to the microphone to say, as understated as her music, “This like no other place I’ve ever seen.”
More photos below.

Next ArticleExtended Play: An interview with 2012 MacArthur Fellow Junot Diaz