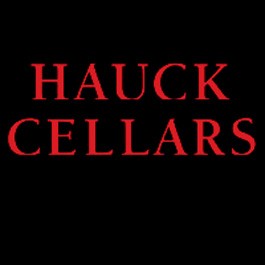 The tasting room was only open by happenstance on Thursday afternoon for a group that had yet to materialize from the muggy gray day, but Greg Hauck was welcoming curious passersby in to sample his wines, no problem. Hauck had reason to be in a good mood: he had got most of his grapes in before the rain, and his wine had just won double gold medals at the Sonoma County Harvest Fair.

I joined some out-of-towner art aficionados who had just dropped in because of the artwork on Hauck’s label. What I had originally and mistakenly surmised was a disquieting artist’s rendition of Margaux, an earnest Weimaraner who appears on Hauck’s Sauvignon Blanc label, actually depicts a mountain lion and a deer—in what disquieting or perhaps surprisingly peaceful pairing Hauck says is open to interpretation.

Although perhaps too often compared to art, wine is also open to interpretation, the grape being far less portable. Wine fans Greg and Jennifer Hauck became enamored of Sonoma County through their travels, convinced that they must make their own Bordeaux-style wines. So they uprooted themselves from the peach tree state and landed in this 1948 Quonset hut just off the Healdsburg plaza. The tin-roofed hut has been many things over the years: laundry, army surplus store, and more recently, the Chateau Felice tasting room. It sports a long bar with plenty of elbow room.

They’ve only been at it since 2004, but Hauck’s wines are showing a well-defined style. The 2007 Dry Creek Valley Zinfandel ($30) has a pretty nose of crushed raspberry fruit, with both vanilla and toasty cedar spice, from . . . a combination of American and French oak barrels? Yep, point for me. It’s not so much a typical Dry Creek Zin—more like a bright Merlot with no hint of greens—but it’s a delicious quaff.

The 2006 Alexander Valley Cabernet Sauvignon ($48) has a pretty raspberry nose much like the Zin, with a plush structure, and garnered best of class at the 2009 Harvest Fair. With distinct notes of cranberry-cherry, and a hint of licorice, the 2006 Tableau ($49) Bordeaux style blend’s best feature is the sleek finish of a claret some years its senior, only lightly astringent, not grippy or drying.

Hauck says they’re discontinuing their Syrah program, and not without good reason. The otherwise balanced 2005 Russian River Valley Syrah ($25) is marred by funky aromas of wet hay and chopped weeds. Hauck says they had wanted a simple table wine like they’ve enjoyed in French country inns, but have not been happy with it; indeed, if only it was not a California Syrah, it might be lauded for its rustic typicité.

No matter. The Haucks’ self-stated aim is to be the “best Bordeaux house in Sonoma County.” That’s a tall order, but so far, not bad for kids from the Atlanta metropolitan area.