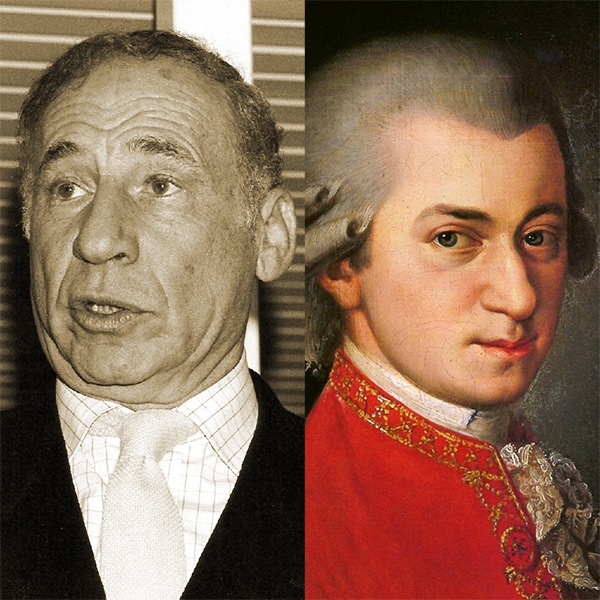 The Producers originated as a 1967 film by Mel Brooks. Brooks wrote music and lyrics to turn the film into a musical which premiered on Broadway in 2001; he subsequently turned the musical into a second movie in 2005. The Broadway musical ran for 2,502 performances, and won a record-breaking 12 Tony Awards.

The story concerns a pair of Broadway producers who hatch a plot:

Step 4: hire the worst actors in New York and open on Broadway and before you can say

Step 5: close on Broadway, take our two million, and go to Rio.

But the show is so ridiculous that it becomes a hit.

Der Schauspieldirektor (The Impresario) is an opera with dialogue by W.A. Mozart, and, text by S. Gottlieb, coincidently a not particularly successful librettist!  It was written in 1786 for a competition hosted by Joseph II, and was first performed at the Schonbrunn Palace in Vienna. Described by Mozart as “a comedy with music,” the story involves an impresario who is forming a new theatrical company. He holds auditions at which two divas sing arias that display their differing talents; when both are hired, they argue about which will sing the lead role, and who will be paid more. The situation is resolved when the tenor convinces them to compromise by dedicating themselves to the larger glory of art.

How does our mash-up work?

We set Der Schauspieldirektor in the context of an academic project by a woman who “dreams of making an impact in the field by staging an opera that portrays women with intention and pushes back against sexist themes.” Adding Mel Brooks’ wacky commentary on the trials of producing a Broadway show (“The worst show in the world”) allows us to expand the cast of characters to showcase more of our talented students, to offer an entire opera for our annual production, and to indulge our taste for the absurd.

Suitable for all ages.