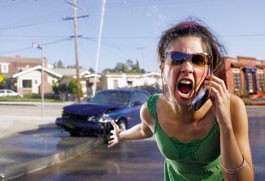 It’s been a sad few days for me, mostly because the seven-year-old nephews of a friend of mine were involved in a terrible car accident in Idaho. They were on their way to a funeral for their great-grandmother when a driver recklessly passed a bus, forcing their vehicle off the road. The kids sustained the most critical injuries and had to be air-lifted to a trauma ward.

When I read the article about these boys, whom I don’t know and have never met, I teared up. They are beautiful children, whom their father calls brilliant, athletic and lively. Their grandfather was quoted in the paper as saying, “They are as pure as there is. God, they are beautiful.” Though the doctors are hoping both boys will walk again, they may be paralyzed.

The worst thing is that this family doesn’t have much money, and no one involved in the accident had automobile insurance. And, like more and more Americans, the family doesn’t have health insurance, either. The kids’ medical bills are going to be steep. The whole thing is just so troubling.

A few short years ago, I would’ve been in the same situation in terms of auto insurance. Somehow, I managed to drive around without being insured, and nothing bad happened to me. I’ve always hated the idea of insurance; it’s sort of like betting that something bad will happen to you, and by virtue of betting, it becomes like a prayer that might come true.

And look, when you’re poor but you need a car for work, sometimes it just happens that you can’t afford to both fuel the car and pay for insurance. You make a decision, and bad stuff happens.

That’s why I was relieved to see posted at the DMV (yes, I was there again, registering my second car) an 800 number for low-cost auto insurance. For the hell of it, I called the number and started checking off the list. The deal is, you have to meet the following criteria: Nineteen years old or older (check). No moving violations in the last three years (check). Car may not be worth more than $20,000 (double, triple, check). Can’t be a college student claimed as a dependent (check). Can’t already have insurance (check).

If, like me, you’ve got these covered, one must meet income requirements, which is 250 percent of the poverty level. In case you’ve been wondering, for one person, the poverty level is $9,800 per year. That means if you make $24,500, you qualify for coverage. Go ahead and give them a call at 1.866.602.8861, and they’ll send you a list of agents who use the Low Cost Automobile Insurance Program. Until recently, this program had only been available in Los Angeles and San Francisco counties, but Alameda, Fresno, Orange, Riverside, San Bernardino and San Diego counties have now been added. The cost per year using this program is around $350.

According to the program’s website (www.aipso.com/lc), the concept behind the program is that low-income folks would buy insurance if they could afford it, that cost was the main barrier. Unfortunately, when I read the coverage terms, I was pretty disappointed. The liability limits are $10,000 bodily injury or death per person, $20,000 bodily injury for each accident and $3,000 property damage. This kind of coverage would barely pay for one week of treatment for my friend’s young relatives.

The Insurance Information Network of California, which describes the low-income insurance program as an attempt to “stem the tide of uninsured drivers in California,” reports that “the pilot program has met with mixed results since its inception, due in large part to competitive auto insurance rates in California at the time of the program’s introduction and the fact that many poor people have few assets to protect.”

Few assets to protect. I would argue that poor people do have assets to protect. This is what I hate about insurance companies–they think of people as dollar signs. The fact is, poor people simply can’t afford insurance. They probably still can’t afford insurance, even with this supposedly generous program; over $300 a year is a lot for someone who makes $8 an hour. The low-income insurance program should include better coverage than $10,000 for a life. I think we’re worth more.