.Brown Says Dungeness Shutdown a Disaster In Letter to Commerce Department; Could Open door to Cash Assistance to Crabbers 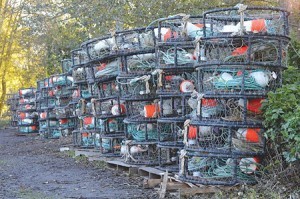 I just heard from Jordan Traverso at the state Fish and Wildlife agency who informs the Fishing Report that today, Gov. Jerry Brown sent a letter U.S. Secretary of Commerce Penny Pritzker, that “requested federal declarations of a fishery disaster and a commercial fishery failure in response to the continued presence of unsafe levels of domoic acid, a potent neurotoxin, in Dungeness and rock crab fisheries across California and the corresponding closures of those fisheries.”

Brown’s move follows on the feds declaring a de facto disaster last week, at Brown’s request, which opened the door to low-interest Small Business Administration loans for out-of-work crabbers in the state. But the crabbers don’t want loans, they want and need cash assistance to deal with the immensely bad fallout from a crabbing season that is all but canceled. There’s still no word on if, or when, the fishery shutdown will end; the state moved to delay the Nov. 15 season opener until the domoic levels dropped to a safe level. They haven’t. Now, this direct state push for a disaster declaration from California’s chief executive opens the door to cash assistance in over a dozen counties affected by the closure.  “Economic assistance will be critical for the well-being of our fishing industry and our state,” Brown wrote Pritzker. The move by Brown comes one day before a big fisheries hearing in Sacramento is to commence, with the Dungeness fishery-closure atop the agenda.

Beyond the SBA loan offering, “the federal declaration of a commercial fishery failure will help hardworking Californians who have lost their livelihood to this natural disaster to receive vital economic assistance,” Charlton H. Bonham, Director of the California Department of Fish & Wildlife, says in the CDFW statement. “We remain committed to doing everything we can for the affected fishing families and businesses—and communities that depend upon them—across every sector of the crab industry.”

In the release, Traverso notes that “the Governor’s request to the Secretary of Commerce initiates the evaluation of a federal fishery resource disaster under the Interjurisdictional Fisheries Act of 1986 and a commercial fishery failure under the Magnuson-Stevens Fishery Conservation and Management Act of 1976. Should a determination be made to declare a disaster and failure, this enables state and federal agencies to work together to determine the full economic impact of the disaster and to provide economic relief to affected crabbers and related businesses.” The Dungeness economy generates between $60 and $90 million a year in California. This year: $0.

Healdsburg Sen. Mike McGuire, a leading voice in Sacramento on the crippling impacts wrought by the Dungeness shutdown—and who co-convened Thursday’s big fisheries meeting—was quick to heap praise upon Gov. Brown for advancing the disaster declaration to the feds. McGuire was one of about 11 lawmakers who sent Brown a letter in late January that implored him to push for the disaster declaration. McGuire noted in a statement that today’s move “will provide desperately needed assistance to the crab industry and local businesses who are struggling. Fishermen are losing homes, racking up debt they can’t afford, and selling off assets, and the impacts are even greater in coastal towns that depend on a healthy crab harvest for their livelihood.”