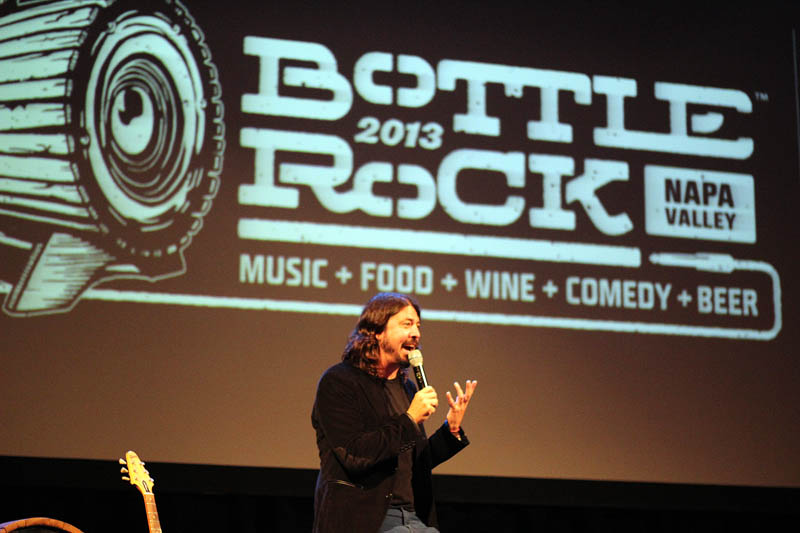 Gabe Meyers, co-founder of BottleRock, stood in front of the crowd at the Uptown Theatre last night and asked “Did you ever think this would happen in… Napa?”
He was referencing the four-day music festival, the largest thing to hit the sleepy city since, well, ever. He received thunderous applause from the crowd awaiting an on-stage appearance by Dave Grohl, lead singer and guitarist of the Foo Fighters and drummer of Nirvana, in town last night for a screening of his documentary, Sound City. Meyers then reminded the everyone in the one-third–full venue that tickets were still available for most days of the festival. “Sometimes it feels like a bit of a surf break secret, like you don’t want to tell anybody,” he said. “But we really need people to know about it.”
The attendance for Grohl’s film was affected by the last-minute booking—it was finalized less than a week prior—and because it was a benefit for autism causes, tickets were $100. But the movie is fantastic, especially for audio nerds like myself (I even wore an Onkyo shirt to the screening). Sound City is about the recording console at a fucked up, nasty studio in Los Angeles that recorded some of the best rock albums of all time. It’s captivating for even the non-audio engineer thanks in large part to the vast swath of famous producers, musicians and engineers interviewed for the movie.
“Originally the idea was just to make a short film and it kind of just exploded into this idea,” said Grohl before the screening. “We wanted to inspire the next generation of musicians to fall in love with music as much as we did.” After much applause, he continued, “We decided early on we wanted to make this completely independent of any major studio or any Hollywood shit, we just wanted to make our own movie. It cost a fuckin’ fortune, just so you know.” Cue more applause. 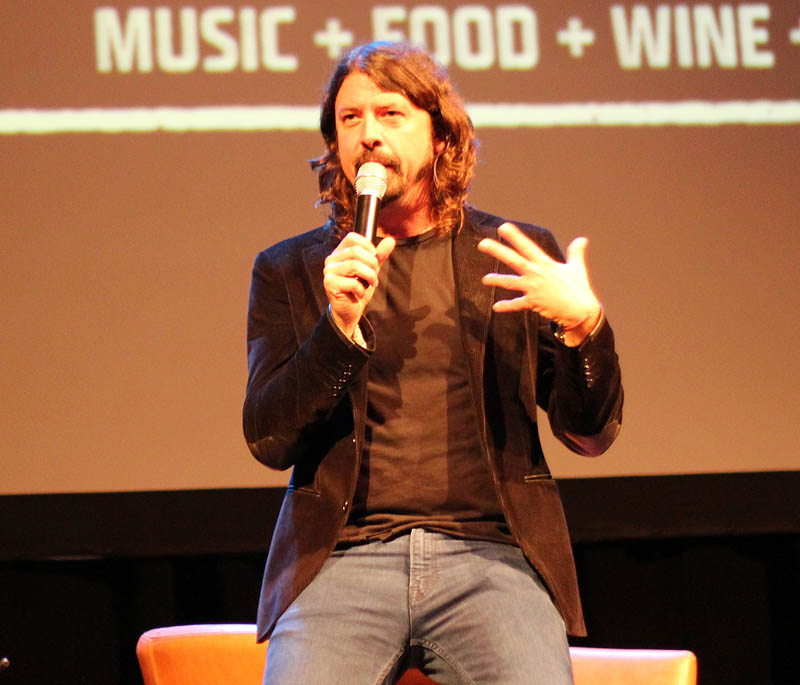 Grohl’s interest in making Sound City was piqued when he learned the studio was closing and selling all of its gear. The band that made him famous, Nirvana, had recorded the album that made them famous, Nevermind, at the studio. Nothing sounds like a recording made at this studio on this board, one of only four like it ever produced by engineer Rupert Neve (it cost twice as much as a house in the area at the time). “I wouldn’t be here if it weren’t for this board,” says Grohl in the movie. So he bought it and installed it in his own studio. The documentary chronicles the history of the board, and of Sound City Studios, and highlights the beauty of analog recording using consoles like this and two-inch tape instead of computers to capture sound.
“I have to honestly say that this is probably the thing that I am most proud of that I have ever done creatively in my life,” said Grohl, “because it’s not for me, its for you.”
There were may cheers from the audience during both the movie and the 45-minute Q&A session between Meyers and Grohl afterward. Music in the movie, all of which was recorded on the console, was blared loud and often, which made the atmosphere less like a movie theater and more like a rock concert. Beer and wine helped, too. Some had too much, like the girl who tried valiantly to remain upright during the autograph session following the Q&A session, trying to get something signed.
All in all, it was a rock concert of a movie, and a smart and fun way to kick off BottleRock.

Next ArticleTaking Plagiarism Out of Journalism, One Story at a Time