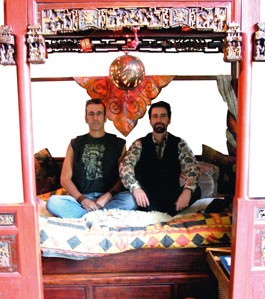 El Fudo and Wizzbang Mahnkae do not live typical middle-aged lives. Nor do they live in a typical North Bay home. The eccentric couple, best known for their roles in Sonoma County’s Baby Seal Club band, live in a home designed and built in 1989 to resemble a sailing ship. Entered through an inviting cave of wisteria, the home perches atop a hill surrounded by redwood trees and wildflowers just west of Sebastopol. When not performing, the couple, who prefer to go by their stage names, make a living by selling art and real estate.

The most significant detail in the home is the presence of a nearly 200-year-old Chinese wedding bed that sits to the side of their comfortable family room. The bed, which would never be found at the local Ikea, holds a portrait of a Chinese bride of long ago, along with images of ancestors and rabbits to promote fertility.

During El Fudo’s battle with cancer (he is pictured left), he received harrowing news about the seriousness of the disease’s progression. Faced with the possibility of losing his partner, Wizzbang impulsively purchased the piece at IMG Antiques in S.F. and transported it to Sonoma County in his tiny Toyota Tercel in hopes of providing a healing space in which Fudo could recover from the illness. It worked. El Fudo has been cancer-free for over five years.

The couple’s former garage is used as a practice studio for their band, Baby Seal Club. The practice area includes a bar and DJ table in the form of a sliced Nash Metropolitan that El Fudo found while cruising Craigslist for a tiki bar.

The kitchen overhang holds mini-altars of such family items as little mask-wearing monsters, plastic dinosaurs and a bust that Wizzbang’s art professor father used in the classroom. Constructed of bakelite, an early plastic material, she’s since been clothed with gold paint and a 1930s park ranger hat.

Wizzbang’s father created a themed lounge, the Sultan Room, at the St. Francis Hotel in Hollywood in the early 1950s. This sign, which has surely witnessed its share of exciting Hollywood action, was passed on and now sits above Wizzbang and El Fudo’s kitchen, protected by monsters, dragons and sparkling demons.

Even grown men enjoy an occasional outdoor shower. This fully stocked sun shower provides many a summer refresher behind the house.